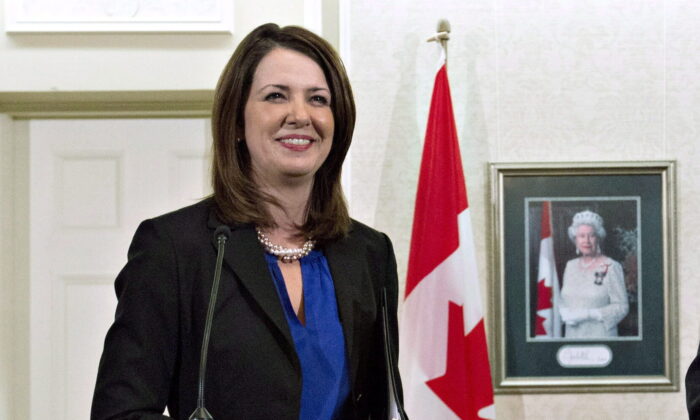 Former Wildrose leader Danielle Smith says she is coming back to Alberta politics with her sights set on becoming the next leader of the United Conservative Party (UCP).

Smith said in an interview with Postmedia on March 30 that she will run for the UCP nomination in the riding of Livingston-Macleod for next year’s general election in May.

The former official opposition leader said she will also seek the party leadership if Premier Jason Kenney loses the position in his upcoming leadership review.

Smith was the leader of the Wildrose Party but crossed the floor in 2014 to join the governing Progressive Conservatives to unite the right, but lost her seat when she ran as a PC candidate in the next election in 2015.

She says she is now returning to politics because she’s upset that the UCP cancelled its April 9 general meeting, and changed the leadership review vote to a mail-in ballot.

UCP executives said last month that with 15,000 members expected to vote, the process had become too unwieldy for the planned one-day, in-person vote in Red Deer.

Smith also said she was angry over the recently leaked audio of Kenney characterizing people trying to influence the UCP as “lunatics” or bigots, saying it was not helpful for unity.

The remarks, made privately by Kenney to his staff on March 18, were secretly recorded and later leaked to the media. The premier was heard characterizing the fractious leadership review as a fight for the soul of his party.

“The lunatics are trying to take over the asylum, and I’m not going to let them,” Kenney said in the recording, as reported by CBC and Global.

“These are just kooky people generally,” he added.

On March 25, Kenney defended himself, saying the UCP is under siege from extremist elements who are seeking a hostile takeover by toppling him in the leadership review.

“I acknowledge that there are a lot of mainstream conservatives who are frustrated with the past two tough years and would like [a] leadership election. I respect them in their perspective,” he told reporters in Calgary.

“At the same time, I have seen a growing number of voices from the far margins of Alberta politics, that are, I would say extreme and have been trying to get involved in the leadership process in our party. That does concern me.”

The premier cited several examples, including in relation to his announcement on March 23 that Walmart will be building a fulfillment centre in Rocky View County, creating 325 permanent jobs.

“I went and checked out my Facebook, and the first and most popular comment said ‘Walmart is trafficking children on their US websites. They’re part of the World Economic Forum,’ and the person who posted that is committing to vote against me in the UCP leadership, alleging that I’m involved in a human trafficking ring with children, conspiring with Walmart and the World Economic Forum,” he said.

He added that after he announced ending the province’s COVID-19 restrictions, he received threats on his Facebook account.

“’We’re coming for you Kenney. On April 9, we’re taking you and your corrupt government down,'” he said.

Kenny said he will not apologize for calling out “these kinds of voices of division.”

“I am determined to ensure that such hateful, extreme, and divisive voices do not find a home in this mainstream, broad conservative party.”

Smith’s return to provincial politics will probably see her joining the leadership race with Brian Jean, who recently won a byelection in the riding of Fort McMurray-Lac La Biche, against Kenney.

Jean was elected as the new leader of the Wildrose Party in 2015. In July 2017, he agreed to join forces with Kenney’s Progressive Conservative party to form what is now the UCP, a move initiated by Kenney to unite the two parties in a bid to oust the NDP.