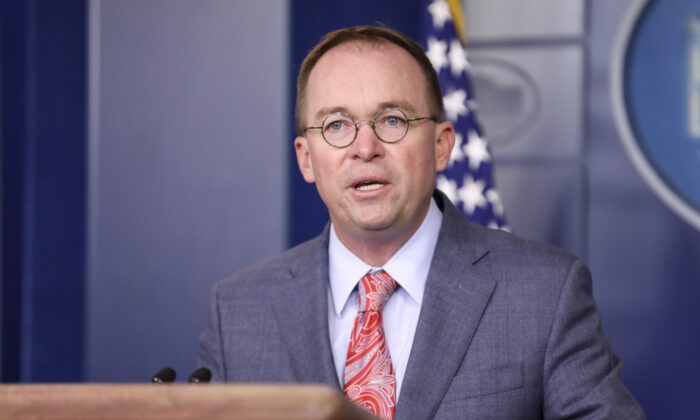 Former White House chief of staff Mick Mulvaney said in an interview with CNN on Aug. 11 that he never witnessed “intentional destruction of important papers” during his time in office.

Mulvaney, who served the Trump administration for 15 months and has been a critic of former President Donald Trump since, told CNN’s “New Day” host Brianna Keilar, “I never saw the intentional destruction of documents for the purpose of keeping anything from the National Archives or the public in the future.”

According to Mulvaney, all White House staff were well aware of how to comply with paper destruction regulations.

“We knew the rules, we taped them back together, and we made copies. As long as copies are preserved, you can pretty much do whatever you want to with the other documents,” he said.

Grilled by Keilar if he had ever seen Trump rip documents, Mulvaney said he had, but asserted that documents were all handled “in the ordinary course of business.”

“The flushing,” the host said, referring to claims made by New York Times reporter Maggie Haberman. “You never heard about him flushing documents?”

The statement came with a pair of photos from an anonymous source purporting to show notes written by Trump in a toilet allegedly at the White House.

Trump swiftly denied her account, calling it “another fake story” when it first emerged back in February.

“Also, another fake story, that I flushed papers and documents down a White House toilet, is categorically untrue and simply made up by a reporter in order to get publicity for a mostly fictitious book,” Trump said in an emailed statement to the New York Post.

Haberman doubled down on her claim in an interview with CNN on Aug. 8, the same day that the FBI conducted a search at Trump Mar a Lago residence and just ahead of the October publication of her book on Trump, “Confidence Man.”

Her account this time was again dismissed by a spokesman for the former president.

“You have to be pretty desperate to sell books if pictures of paper in a toilet bowl is part of your promotional plan,” Taylor Budowich told Axios, referring to Haberman, adding that there are “enough people willing to fabricate stories like this in order to impress the media class—a media class who is willing to run with anything, as long as it’s anti-Trump.”