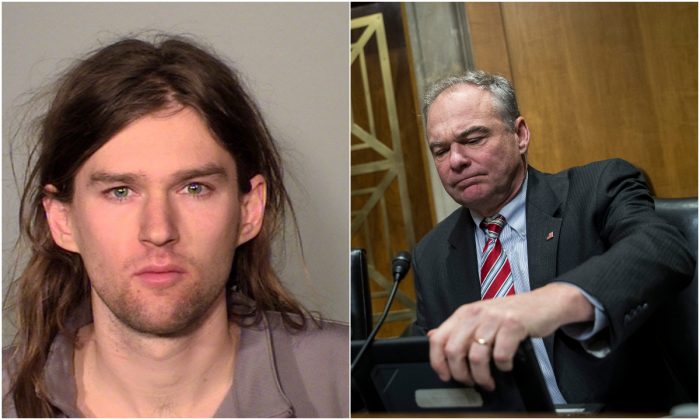 Linwood Michael “Woody” Kaine, the youngest son of Sen. Tim Kaine (D-Va.), was sentenced to a year of probation for resisting arrest after he participated in an anti-Trump protest that disrupted a Minnesota Trump rally in March. Sen. Kaine was Hillary Clinton’s running mate during the 2016 presidential election.

The Trump rally was held at the Minnesota state Capitol in St. Paul and attracted about 400 Trump supporters. It included a prayer and consisted mostly of people sitting or standing in the Capitol’s Rotunda and listening to speeches.

A group of between 75 and 125 anti-Trump protesters gathered across the street from the building at around 12 p.m., according to the criminal complaint against Linwood. Police observed some of them gather behind nearby bushes changing into black clothes and concealing their faces. One of them was Linwood, 25.

A group of several dozen anti-Trump protesters then entered the capitol, chanting obscenities at Trump and accusing Trump of racism. They stopped on a stairway leading to the Rotunda (where the rally was in progress) faced with a group of a few dozen Trump supporters, who shouted “USA” and pro-Trump slogans.

A number of the anti-Trump protesters were clad in black, had covered faces, and some wore goggles. St. Paul Police had intelligence that “anarchists” were planning violence against Trump supporters at the March 4 rallies. Police suspected that the so-called anarchists were the masked, black-clad individuals. Such attire is typical of far-left extremist group Antifa, which advocates violence to overthrow the government and capitalism. One of the protesters was captured on video waving a large Antifa flag outside the capitol building.

Antifa was founded in Germany in the 1920s as the violent wing of the Communist Party of Germany (KPD), which at the time was trying to establish a communist dictatorship in Germany on behalf of the Soviet Union. Part of its role was to brand any form of capitalism and all rival political parties as “fascist.”

A joint intelligence assessment by the FBI and the Department of Homeland Security described Antifa’s activities as “domestic terrorist violence,” according to confidential documents first reported on by Politico.

One of the masked people was also caught on video throwing a smoke bomb inside the Capitol building, the criminal complaint stated. A witness pointed out who threw the bomb to the building security guard, who then tried to detain the person. But the person wrenched from the guard’s hold and bolted for the building’s exit, along with at least four others, all dressed in black, hooded, and with covered faces.

Police later observed, from an unmarked car, the five persons changing clothes and otherwise altering their appearances behind bushes in a parking lot near the Capitol.

As the five walked towards the nearby light rail station, police officers confronted them and told them they were under arrest. They scattered, but the officers chased them down.

One of the five was Linwood. When an officer caught up with him and grabbed him, Linwood tried to break free, the complaint stated. Even after the officer pulled Linwood to the ground and other officers arrived, Linwood continued to resist.

“The defendant continued to fight the officers on the ground, bucking and flaring his arms and legs,” the complaint stated. “After several warnings to stop resisting, the defendant said, ‘Okay, I am not resisting anymore’ and was arrested.”

Linwood was charged with three misdemeanors: interfering with peace officer, fleeing a peace officer by other means than a vehicle, and concealing his identity in a public place. The latter two charges were dismissed and Linwood was sentenced to one year probation and a fine of $236 for the first charge associated with his resisting the arrest.

In March, Senator Kaine’s spokesperson told media that there was “no suggestion that [Linwood] engaged in disruptive behavior while at the rally but [authorities] are instead focused on his actions as he was arrested after he left.”