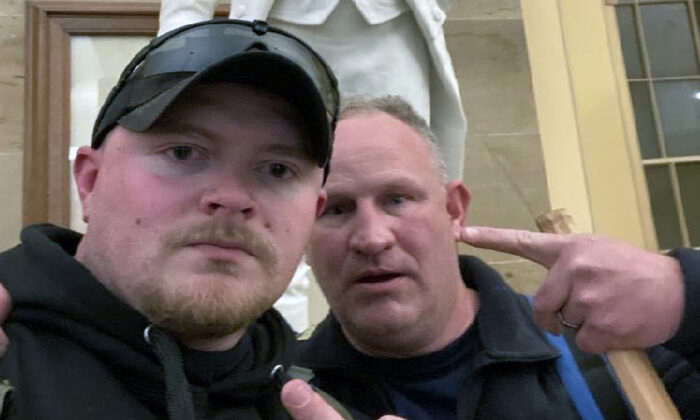 Jacob Fracker, 30, a former Virginia police officer, pleaded guilty to a felony charge of conspiracy to obstruct counting of electoral votes on Jan. 6, 2021. He posed for this selfie with co-defendant Thomas Robertson in the Capitol Crypt. (U.S. Department of Justice/Screenshot via The Epoch Times)
US News

A former Virginia police officer who took a selfie-style photo of his middle-finger salute along with a coworker inside the U.S. Capitol on Jan. 6 pleaded guilty to a felony conspiracy charge on March 18.

Jacob Fracker, 30, formerly with the Rocky Mount Police Department, took a plea deal under which several other charges will be dismissed at sentencing. Fracker admitted to conspiring with co-defendant Thomas Robertson to obstruct the counting of Electoral College votes at the Capitol on Jan. 6.

“In his plea, Fracker admitted that by the time he and Robertson entered the Capitol, they had agreed to attempt to impede, stop, or delay the proceedings going on before Congress and that they aided, assisted, encouraged, and facilitated each other in the conduct,” the U.S. Department of Justice said in a statement.

Fracker and Robertson were both Rocky Mount police officers when they traveled to Washington to attend President Donald Trump’s rally at the Ellipse. They entered the Capitol about 2:15 p.m. and posed for a selfie in front of a statue of John Stark in the Capitol Crypt. Fracker made a middle-finger gesture in the photo.

Fracker shared the middle-finger photograph with police colleagues, some of whom posted it online. In a Facebook post, Fracker wrote: “Lol to anyone who’s possibly concerned about the picture of me going around. Sorry I hate freedom? … Not like I did anything illegal, way too much to lose to go there, but y’all do what you feel you need to, lol.”

He sent another photo and two videos to a friend on Facebook, writing, “Don’t share these. Just thought you should know there’s hitters out here trying to make a [expletive] difference at any cost,” according to prosecutors.

Fracker and Robertson were fired from the Rocky Mount Police Department after their involvement in Jan. 6 events came to light.

Fracker could be called to testify against his codefendant at Robertson’s upcoming trial. In court filings, Fracker said he views Robertson as “a father-figure and mentor” with whom he worked closely and socialized frequently.

Fracker pleaded guilty to conspiracy, although the obstruction of a government proceeding issue on which it rests has come under increased scrutiny in other Jan. 6 cases. District Judge Carl J. Nichols threw out obstruction charges in two cases in March.

In rulings issued March 7 (pdf) and 15 (pdf), Judge Nichols said the subsection of U.S. Code used in the cases was meant to prevent tampering or destruction of documents and records, not alleged attempts to delay or derail certification of the presidential election results. Many of his colleagues in the District of Columbia Circuit have issued contrary rulings on the issue.