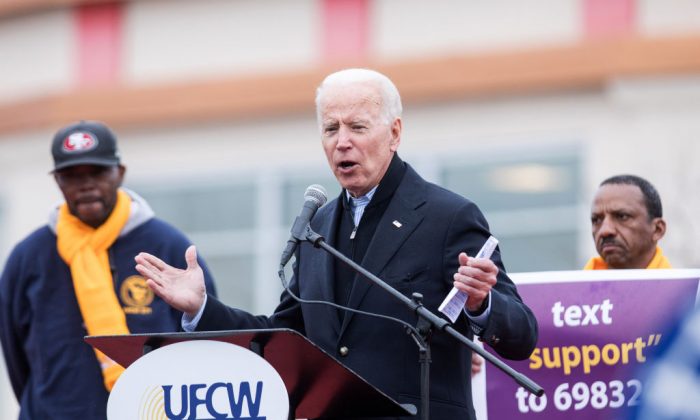 Former Vice President Joe Biden on April 25 officially announced he will be running for president, launching his third bid for the Oval Office in a video on social media.

Biden, 76, starts out of the gate as the frontrunner of the now 20-strong Democratic field, according to polls.

Some analysts have said that Biden’s standing in the polls is the result of the former U.S. senator from Delaware’s name recognition from over four decades in public office, including eight years as former President Barack Obama’s No. 2 in the White House.

Biden, who ran for president in 1988 and 2008, is expected to make his first appearance as a candidate for the 2020 election on April 29 at an event in Pittsburgh featuring union members.

The core values of this nation… our standing in the world… our very democracy…everything that has made America — America –is at stake. That’s why today I’m announcing my candidacy for President of the United States. #Joe2020 https://t.co/jzaQbyTEz3

The ramp-up to Biden’s announcement was marred in recent weeks by accusations relating to his conduct with women, prompting speculation that his bid for the presidency may fall victim to the #MeToo movement. Several women had stepped forward complaining that he had made them uncomfortable with his longtime tendency for kissing and touching strangers during political events.

In a video post on Twitter in response to the allegations, Biden said: “It’s just who I am. And I’ve never thought of politics as cold and antiseptic, I’ve always thought of it [as] about connecting with people. I will be more mindful and respectful of people’s personal space, and that’s a good thing.”

Biden has been aggressively critical of President Donald Trump. In March 2018, Biden said that if the two were in high school, he would “beat the hell” out of the president because of the way he said Trump talked about women.

Trump’s response was to label the former vice president as  “Crazy Joe Biden” and to respond to Biden’s schoolyard fight reference by saying Biden would “go down fast and hard, crying all the way.”

In his two previous presidential runs, Biden failed to develop a strong base of political support, dropping out of the race both times. If he were to be elected this time, he would be 78 years old when taking office, which would make him the oldest president-elect in U.S. history.

Biden has for weeks been the clear frontrunner in all major polls tracking actual and possible 2020 Democratic presidential contenders, including Morning Consult, Monmouth, Harvard-Harris, and Emerson. According to a RealClearPolitics average, Biden leads at 29 percent, while self-described socialist Sen. Bernie Sanders (I-Vt.) trails at 23 percent.

But Biden is losing ground to Sanders, who came in atop an Emerson Poll conducted between April 4 and 11.

“Biden has seen his support drop. In February, he led Sanders 27 percent to 17 percent, and in March, the two were tied at 26 percent. Now, Sanders has a five-point lead,” Spencer Kimball, director of Emerson Polling, said in a statement.

The nearest candidates to Sanders and Biden are polling at around 8 percent.

Trump has welcomed taking on either candidate.

“I believe it will be Crazy Bernie Sanders vs. Sleepy Joe Biden as the two finalists to run against maybe the best Economy in the history of our Country (and MANY other great things)! I look forward to facing whoever it may be. May God Rest Their Soul!” Trump wrote in an April 16 tweet.

The Emerson poll showed Biden performing best in a head-to-head contest with President Donald Trump, with 53 percent of the respondents picking Biden and 47 percent favoring Trump.

Sanders’s popularity is indicative of the shift to the hard-left within the Democratic Party. For example, Sanders’s socialist Medicare for All bill had no co-sponsors in Congress six years ago but the bill is now supported by one-third of Senate Democrats and two-thirds of House Democrats.