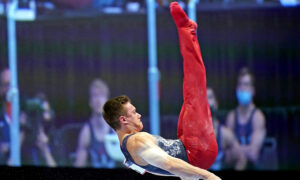 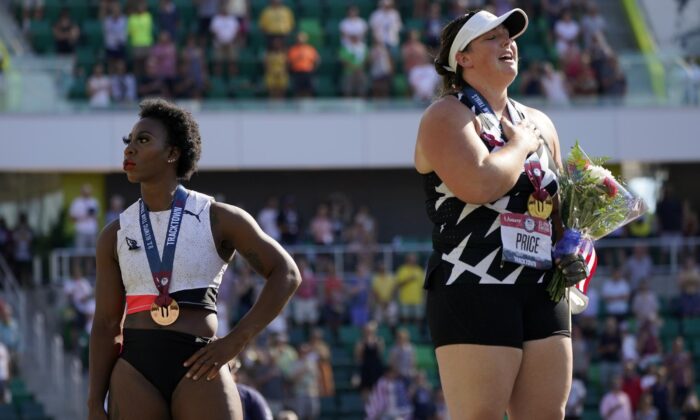 Gwendolyn Berry (L), looks away as DeAnna Price stands for the national anthem after the finals of the women's hammer throw at the U.S. Olympic Track and Field Trials in Eugene, Ore., on June 26, 2021. (Charlie Riedel/AP Photo)
US News

Two Republican lawmakers are calling for hammer thrower bronze medalist Gwendolyn Berry to be removed from the team after using her position in the U.S. Olympics as a vehicle for her activism.

Rep. Dan Crenshaw (R-Texas) and Sen. Tom Cotton (R-Ark.) made similar comments over the June 26 incident when Berry decided to turn away from the American flag and place a black T-shirt over her head as the National Anthem was playing during the U.S. Olympic Track and Field Trials in Oregon.

“We don’t need any more activist athletes,” Crenshaw said during an interview with Fox News on Monday.

“She should be removed from the team,” the lawmaker argued. “The entire point of the Olympic team is to represent the United States of America. It’s the entire point.”

Cotton expressed a similar view on Monday, explaining that he thinks it isn’t asking too much from athletes competing in the U.S. Olympics to “wear the Stars and Stripes” and simply honor the flag and National Anthem while standing on the medal stand.

“If Ms. Berry is so embarrassed by America, then there’s no reason she needs to compete for our country,” the senator said. “She should be removed from the Olympic team.”

Both lawmakers previously served in the U.S. military—Crenshaw is a former Navy SEAL and Cotton served as a Ranger-qualified member of the Army.

Berry, a 31-year-old black American and outspoken activist against “systemic racism” in the United States, made an uproar online as she turned to face the stands instead of the country’s flag as “The Star-Spangled Banner” played, while the gold and silver medalists placed their right hands on their chests and stood facing the flag.

She later complained about the timing of the song, which she claimed was set to play at 5:25 p.m., but instead was played five minutes earlier. The athlete claimed that the organizers did it “on purpose” to her, and that “it was a setup.”

“I feel like it was a set-up, and they did it on purpose,” Berry said of the timing of the anthem. “I was pissed, to be honest.”

“I was thinking about what should I do. Eventually, I just stayed there and just swayed. I put my shirt over my head. It was real disrespectful. I know they did that on purpose, but it’ll be all right. I see what’s up,” she said.

USA Track and Field spokeswoman Susan Hazzard disputed Berry’s claim in a statement, explaining the National Anthem was set to start playing at 5:20 p.m. on June 26, regardless of who was on the podium, and organizers were not going to wait for the athletes.

Hazzard added that the song was played every day according to a previously published schedule.

“They said they were going to play it before we walked out, then they played it when we were out there,” Berry argued. “But I don’t really want to talk about the anthem because that’s not important. The anthem doesn’t speak for me. It never has.”

Berry also took the event to social media, writing along with a picture of her turned away as athletes faced the flag during the anthem that people should “stop playing” with her.

White House Press Secretary Jen Psaki told reporters on Monday the Biden administration supports Berry’s decision to turn her back to the American flag and backs her protesting “systemic racism” in the United States.

“[Biden] is incredibly proud to be an American and has great respect for the anthem and all that it represents … he would also say, of course, that part of that pride in our country means recognizing there are moments where we, as a country, haven’t lived up to our highest ideals, and it means respecting the right of people, granted to them in the Constitution, to peacefully protest,” Psaki said.

Saturday’s protest wasn’t the first time Berry used her position in the U.S. Olympics as a vehicle for her activism.

In 2019, she received 12-month probation after raising her fist while standing on the podium at the Pan American Games, the CEO of the U.S. Olympic and Paralympic Committee wrote in a statement at the time.

The winner of Saturday’s hammer throw competition was DeAnna Price, who won gold after a throw of 263 feet, 6 inches. The second-place finisher was Brooke Andersen, who also won the silver medal at the 2019 Pan American Games.

Berry is qualifying for the Olympic Games in Tokyo scheduled for later this year.