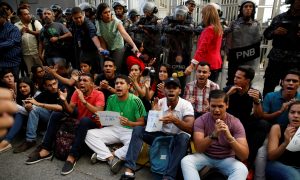 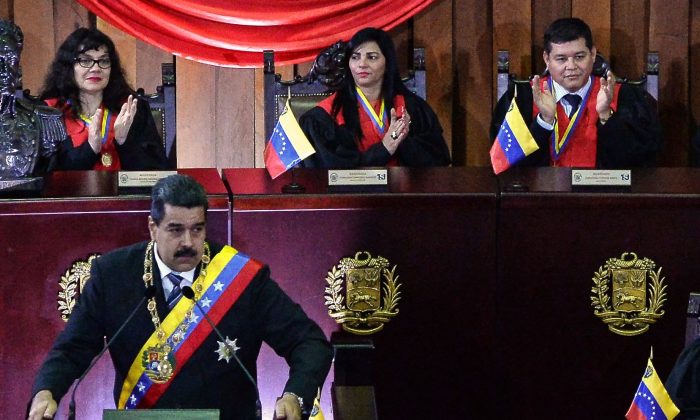 Justice Christian Zerpa (top-R) applauds as Venezuelan President Nicolas Maduro speaks during the opening of the judicial year at the Supreme Court in Caracas, on Feb. 14, 2018. (Federico Parra/AFP/Getty Images)
Politics

Former Venezuelan Supreme Court Justice Christian Zerpa has fled to the United States. He denounced the second term of Venezuelan President Nicolás Maduro who will be inaugurated this week, and told a Miami broadcaster on Jan. 6 he is willing to cooperate with U.S. authorities.

Zerpa’s defection from the South American nation in crisis comes amid growing international pressure on Maduro over his new term due to countries around the world dismissing a broadly boycotted 2018 election vote as a sham.

“I’ve decided to leave Venezuela to disavow the government of Nicolas Maduro,” Zerpa said in an interview with EVTV, which is broadcast on cable and the internet. “I believe [Maduro] does not deserve a second chance because the election he supposedly won was not free and competitive.”

He also said he did not want to “continue to endorse … a government that has only brought hunger, misery, and destruction.”

Venezuela’s Supreme Court confirmed in a statement Zerpa had fled, referring to him as a former magistrate and saying it had commenced an investigation into his professional conduct in November after allegations of sexual harassment involving women in his office. The court’s leadership recommended he be dismissed over the allegations, it said.

For many years Zerpa was an ally of Maduro on the Supreme Court, which backed the ruling Socialist Party in every major legal dispute since Maduro’s 2013 election.

Until 2015 Zerpa was a legislator for Maduro’s United Socialist Party of Venezuela and held several positions in the administration of Maduro’s predecessor, late Hugo Chávez.

Zerpa said Maduro’s administration picked him for the Supreme Court position in 2015 because he was considered to be loyal and disciplined.

“They chose me … with the only intention to guarantee decisions from the [Supreme Court’s] electoral chamber favorable to the government,” he said.

Zerpa wrote a 2016 ruling that provided legal justification for Maduro’s government to strip congress of most of its powers after the opposition defeated the Socialist Party in a landslide election.

In the interview, Zerpa described the Supreme Court as an “appendage of the executive branch” and said that justices, were at times, summoned to the presidential palace to receive instructions on how to rule on certain sensitive cases, such as those relevant to electoral or constitutional issues.

It was either Maduro or his wife, Cilia Flores, who held the ultimate power over the judiciary, he said.

Zerpa said he is willing to cooperate with U.S. authorities and offer his testimony on what he knows, including information about the “conduct of some leaders.”

The Information Ministry did not immediately respond to a request for comment.

Zerpa and Flores were among 14 Venezuelan officials Canada had sanctioned in May, in response to the elections earlier that month. Zerpa said he did not criticize Maduro’s election to ensure he could pave the way for a safe exit from the country with his wife and two daughters.

Opposition leaders have urged foreign governments not to recognize Maduro after his inauguration on Jan. 10, and a group of Latin American nations on Jan. 4 asked Maduro not to take office.

However, diplomats consulted by Reuters said few countries are likely to shutter embassies or sever ties with Venezuela.

Zerpa’s words echoed views of former Justice Eladio Aponte, who fled to the United States in 2012 and said the government of Chávez systematically manipulated court affairs.

Socialist policies of Maduro and Chávez have crippled the oil-rich nation in less than two decades. Food and medicine shortages, hyperinflation, and violent crime have driven almost 2 million Venezuelans out of the country since 2015.

Venezuela exported more than 23 tons of gold worth $900 million to Turkey in the first nine months of 2018, compared to zero over the same period in 2017, according to official Turkish data. The trade pattern illustrates Venezuela’s shift to circumvent U.S. sanctions imposed by the Trump administration, which had strengthened the measures several times since 2017.

The U.S. Justice Department has investigated some Venezuelan officials. In November, it secured a 10-year money laundering sentence for the nation’s former treasurer, Alejandro Andrade, who pleaded guilty to receiving more than $1 billion in bribes.