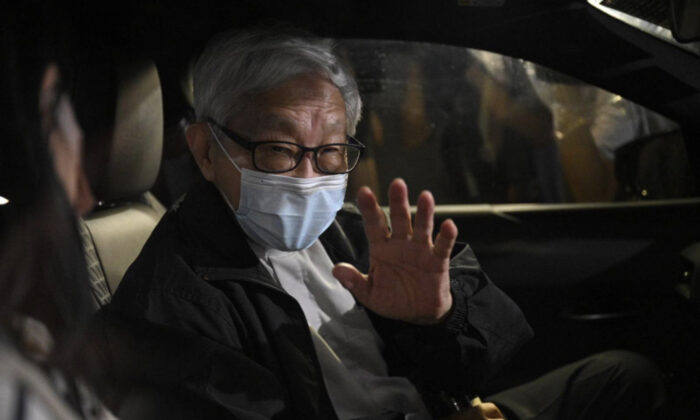 Cardinal Joseph Zen was released on bail after being arrested in May 11, 2022. (Yan Wu/The Epoch Times)
Hong Kong

In March, the Vatican-Hong Kong chaplain Monsignor Javier Herrera Corona delivered a stark message to warn local catholic churches, “You will experience the same restrictions as the churches in mainland China in the future. The freedom of religions we have enjoyed will be a page of the past.”

Mexico-born Monsignor Javier Herrera Corona ended his 6-year term in Hong Kong in March and left for Africa for his new post.

He stated, “Following Communist China’s tightened and stricter controls over Hong Kong, you have to prepare for a tougher future. The change is about to come. So best to be prepared. Hong Kong is not the great Catholic beachhead it once was.”

According to Reuter’s sources, Monsignor’s concerns stemmed from the suppression caused by the National Security Law. He even warned of an integration of Hong Kong and China, which could lead to mainland-style restrictions on religious groups in Hong Kong. Monsignor Corona once mentioned the rights of religious institutions in the Basic Law, which were no longer dependable as pressure from Beijing mounted. His worries also came from the fact that the Chinese Communist Party(CCP) had marked several catholic followers as key persons of the Anti-extradition Movement in 2019, as well as the provocateurs of the National Security Law.

Cardinal Joseph Zen Ze-kiun, was criticized by the state media for being “invincible” before his arrest.

Among the Catholics who have been arrested, Cardinal Zen holds the highest position. The cardinal was arrested by the National Security Bureau of Hong Kong for “collusion with a foreign country or with external elements to endanger national security” as one of the five trustees of the 612 Humanitarian Funds. Zen was later granted bail.

Cardinal Zen had actively opposed the signing of the Vatican-China Agreement which hands over the Vatican’s rights to assign Chinese bishops in China to the Chinese regime and called it a “dirty business.”

Cardinal Zen had even traveled to the Vatican at the height of the COVID-19 pandemic, to request a meeting with the Pope but was rejected.

Cardinal Joseph Zen has been opposing the Hong Kong government’s policies for many years. In 2002, Zen opposed the revision of Article 23 of the Basic Law and supported universal suffrage in Occupy Central.

Cardinal Zen was smeared by the state media Ta Kung Pao and was accused of using his power to stand against the government.

Meanwhile, half a ton of files have left the building.

Before the implementation of the National Security Law, Monsignor Corona and other envoys began to transfer files to Rome in 2019, which weighed over half a ton. Part of the documents was moved away through diplomatic channels. Those files include personal communication with underground religious staffers in China and details of Catholic followers being persecuted by the regime.

In an interview with the Christian Times, Professor and historian Ying Fuk-tsang, of Divinity School of Chung Chi College, Chinese University of Hong Kong expressed the arrest of Cardinal Joseph Zen lead to the Catholic Church’s reaction to moving away the crucial documents from Hong Kong, so everyone became aware that Hong Kong is no longer a bridging community for China.

Professor Ying said there have been too many drastic changes over the recent years; it is hard to be optimistic about the future of Hong Kong churches. Even though there has not been any specific policy against churches, there will be more prudent censorship on publishing and expression.