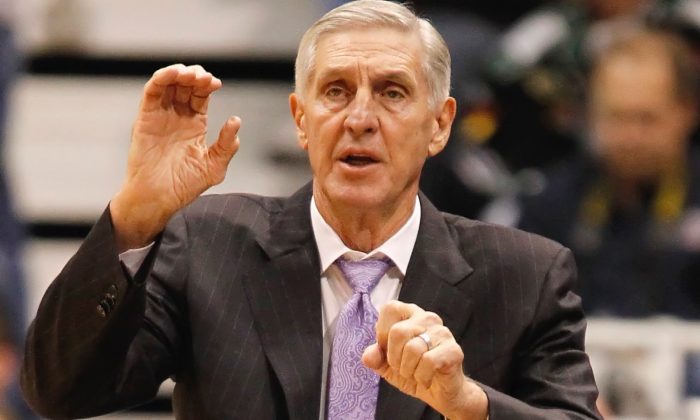 Head coach of the Utah Jazz Jerry Sloan calls a play during a game against the Miami Heat during the first half of an NBA game at Energy Solutions Arena in Salt Lake City, Utah on Dec. 8, 2010. (George Frey/Getty Images)
NBA

The health of former Utah Jazz coach Jerry Sloan has declined rapidly, according to a report from the Salt Lake Tribune which quotes a close source as saying that the 77-year-old “is dying.”

Illinois-born Sloan, who in 2016 disclosed that he was suffering from dementia and Parkinson’s disease, is reportedly now “frail… physically and mentally limited,” and requires round-the-clock care, according to the Tribune’s Gordon Monson.

“It’s basically a slide into oblivion,” wrote Monson, after the source said Sloan is now on limited time.

Sloan also led the team to its only two NBA Finals in 1997 and 1998, however the team lost both years to the Chicago Bulls.

He was described as “one of the greatest and most respected coaches in NBA history,” by former NBA Commissioner David Stern when he resigned suddenly in 2011.

Although he is reportedly no longer physically able to attend Utah Jazz games, Sloan still walks when he can and socializes with his friends, but “his mind, though, is slipping away,” according to the Salt Lake Tribune.

“I don’t want people feeling sorry for me,” Sloan said in 2016, when he first went public with his illness.

Parkinson’s is an incurable progressive nerve disorder that affects speech and movement, although symptoms can be controlled to a degree with medication. An individual with the condition can also experience tremors and stiffness of movement, according to the Mayo Clinic.

Sloan’s second condition, Lewy body dementia, is the second most common type of dementia after Alzheimer’s disease dementia. The condition causes a progressive decline in mental abilities, and can cause visual hallucinations.

“Memory is my biggest problem,” Sloan told Deseret News in January. “Some days I can’t keep up.”

After symptoms first start, Lewy dementia can cause death on average eight years later, according to the Mayo Clinic.

“Jerry Sloan is and always will be a beloved member of the Utah Jazz family, and we know he will approach this fight with the same grit and determination he displayed as a Hall of Fame coach and All-Star player in the NBA for 40-plus years,” Utah Jazz said in a statement in 2016 following Sloan’s announcement.

“On behalf of the Miller family, the Jazz organization and Jazz fans everywhere, we send Jerry and his wife Tammy our love, support and best wishes.”

According to the Salt Lake Tribune, the 77-year-old is being cared for by his wife of 13 years, Tammy Jessop.

His wife is “doing whatever she can to help her man, spending time and sharing love with him as much as possible,” according to the outlet.

With his declining health, she spends two hours helping him to get ready every day, reported Deseret News in January.

“The younger guys might not know who Jerry Sloan is but maybe they know who Karl Malone is and that’s what he meant. He made me who I am,” he said.