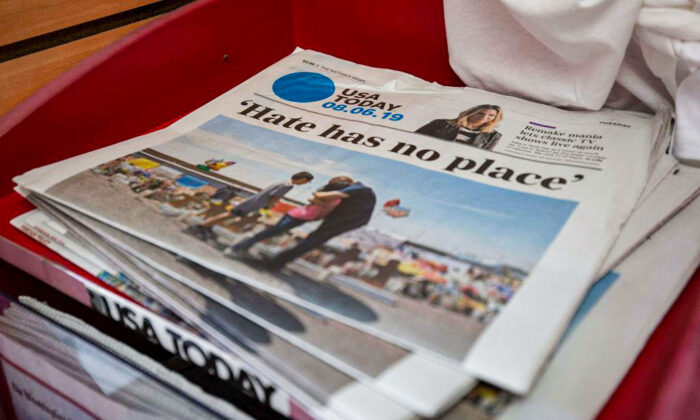 The front page of a USA Today newspaper is seen at a convenience store in Washington on Aug. 6, 2019. (Alastair Pike/AFP via Getty Images)
US News

FAIRFAX COUNTY, Va.—Former USA Today Deputy Editorial Page Editor David Mastio spoke out recently about his demotion in August 2021 over his Twitter post that only women can get pregnant.

“The top leaders of Gannett and USA Today need to take control of their newsrooms and return to the older values, or they’re going to pay the price,” Mastio told The Epoch Times.

Earlier in June, the newspaper chain with more than 200 dailies decided to cut back most of its editorial pages. According to a Washington Post report, reader surveys of Gannett, USA Today’s parent company, showed that the opinion pages “had lost relevance” in the age of the internet.

In the same article, Kristen DelGuzzi, opinion editor at USA Today and Mastio’s former boss, told The Post that the opinion pages hadn’t evolved along with the industry.

Mastio said he found DelGuzzi’s comment to be “a lie and untrue,” the final trigger for him to speak up months after leaving the newspaper in March.

Mastio identifies as a conservative based on his views on abortion, taxes, and school choice, and he’s open with his disdain of former President Donald Trump.

DelGuzzi hasn’t responded to a request from The Epoch Times for comment.

Impossible to Be Both ‘Local’ and ‘Ideological’

“And they just want to bring what feels comfortable to them into the newspaper,” he said.

He described Gannett’s evolvement as “one small step at a time.” The problem he saw was that the company’s leadership “didn’t have the spine to demand these young reporters adapt to USA Today’s values. So they changed USA Today to make it more like its reporters.”

According to Mastio, Gannett’s business model is local and community reporting, owning more than 200 newspapers nationwide.

“And by going far to the left, they’re cutting out half or more of the people in that neighborhood and city who won’t want to read them,” he said. “It’s a contradiction in their business plan. They either want to be local, or they want to be ideological. You can’t be both and succeed.”

Mastio hadn’t spoken out until now, except for a Twitter post on March 11, when he left the company and joined a new online video media outlet, StraightArrowNews.com.

“At last, I am able to say what I couldn’t before: People don’t get pregnant, but women do,” he wrote on Twitter.

His original Twitter post in August 2021 that “people don’t get pregnant, but women do” came after USA Today had just replaced “pregnant women” with “pregnant people.”

He said the LGBT employee resource group (ERG) and newsroom diversity committee, which he viewed as a source of “identity politics” within the company, were the main forces behind the language change. Months before that, in May, the newspaper also published “Pregnant people: Transgender, nonbinary parents give birth, too.”

The ERG and Committee wanted him fired. Instead, he was demoted and later given a warning that if he stepped out of line again, his employment would be terminated. At the direction of senior management, he also deleted his original August 2021 Twitter post and others to keep his job at USA Today.

He had had top editors’ support despite complaints from the staff before August 2021, the first time he was told that he couldn’t speak his opinions.

Mastio was glad to have spoken out: “I feel relieved. I needed to say something for a long time.”

He had chosen to be silent for months because he had a family to support and then had to focus on his new job at StraightArrowNews.com.

“I think as journalism goes off the rails and big companies like Gannett go off the rails, more of us need to speak out,” he said. “People who think journalism is about the facts and being honest with our readers need to stand up for the values that made journalism important and influential, and these [values] are increasingly being abandoned by our industry.”