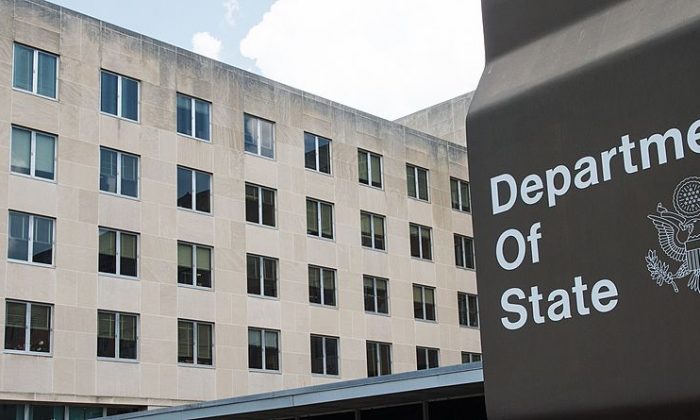 A former U.S. State Department employee was sentenced to 40 months in prison, three years of supervised release, and a fine of $40,000 on July 10, for providing internal state department documents to China in exchange for money and gifts, the U.S. Department of Justice (DOJ) said in a press release.

Candace Marie Claiborne, 63, was accused of conspiracy to defraud the United States, lying to law enforcement and background investigators, and concealing her extensive contacts with two Chinese intelligence agents. According to the DOJ, she provided the agents with documents on topics ranging from economics to visits by dignitaries between China and the United States.

She was arrested in March 2017 and pleaded guilty in April 2019. Her tenure at the State Department began in 1999, and included service in numerous overseas posts at foreign consulates and embassies in Baghdad, Iraq; Khartoum, Sudan; and Beijing and Shanghai, China, according to the DOJ.

She had maintained a top-security clearance at her job. As a result, she was required to report to the State Department any contacts with persons suspected of affiliation with a foreign intelligence agency.

Claiborne didn’t disclose her contacts with the Chinese agents, who provided her with tens of thousands of dollars in gifts, including international travel and vacations, tuition at a Chinese fashion school, a fully furnished apartment, and a monthly stipend, according to the DOJ. These gifts were provided to her and her family over a period of five years.

Writing in her journal, Claiborne wrote that she could “[generate] 20k in 1 year” working with one of the Chinese agents. According to the DOJ, that same agent once tasked her with providing internal U.S. government analyses on an annual U.S.-China Strategic Economic Dialogue that had just concluded at the time. The DOJ didn’t disclose the year.

The U.S.–China Strategic and Economic Dialogue was established by former U.S. President Barack Obama and former Chinese leader Hu Jintao to discuss economic issues, among other topics, between the two countries. The first round of the dialogue was held in July 2009 in Washington.

The press release didn’t provide details about her co-conspirators.

“Claiborne … lied repeatedly about these foreign intelligence contacts. Violations of the public’s trust are an affront to our citizens and to all those who honor their oaths. With this sentencing, justice has been imposed for these dishonorable criminal acts,” said U.S. Assistant Attorney General John Demers in the press release.

John P. Selleck, acting assistant director of the FBI’s Washington Field Office, warned that the Chinese regime was targeting “U.S. security clearance holders” for espionage purposes. “[It] is a constant threat we face,” he said in the press release.

Claiborne isn’t the only former federal employee convicted of working with Chinese spies this year.

In March, Ron Rockwell Hansen, a former Defense Intelligence Agency officer, pleaded guilty to federal charges of trying to send classified U.S. national defense intel to China in exchange for money. He will be sentenced in September.