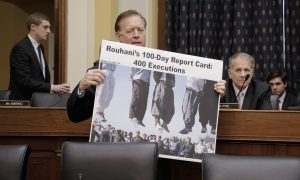 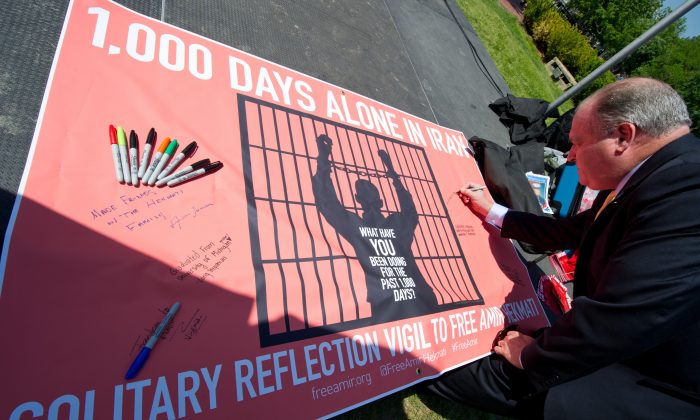 A vigil held in Washington, DC, in the US, on the 1,000th day of US Marine Corps veteran Amir Hekmati's imprisonment in Iran's Evin prison. Falsely accused of spying, now-released Hekmati is suing Iran for prolonged and continuous physical abuse. (KAREN BLEIER/AFP/Getty Images)
Middle East

Former US Marine Sues Iran Over ‘Torture’ While Held Captive

A former US Marine who was accused by Iran of spying and held for 4.5 years is suing Tehran over the “prolonged and continuous physical abuse” he endured while detained.

According to a lawsuit filed in Washington on Monday, May 9th, Amir Hekmati, a US-Iranian dual national from Michigan, was subjected to a slew of physical and psychological abuse while jailed in the notorious Evin Prison.

Hekmati was freed in a prisoner swap in January in which he and three other Iranian–American dual nationals, plus another American, were traded after Washington granted clemency to seven Iranians and withdrew arrest warrants for 14 others.

During his lengthy ordeal, Hekmati was “whipped at the bottom of his feet, struck by an electrical Taser to his kidney area, forced to stay in stress positions for hours at a time, and hit with batons”, the lawsuit states.

The former Marine had been visiting relatives in Tehran in August 2011 when he was nabbed by Iranian officials.

He ultimately was forced to confess to being a CIA spy and sentenced to death, though the sentence was later reduced to 10 years in prison.

Aside from physical abuse, prison guards threw water on Hekmati’s cell floor to prevent him sleeping, kept the light on, and forced him to take lithium and other “addictive pills”, only to stop these to trigger withdrawals, the lawsuit states.

“Iran’s treatment of Amir Hekmati was utterly contemptible,” his attorney, Scott Gilbert, said in a statement.

“Amir was arrested on phony charges, thrown into brutal solitary confinement in one of the world’s most inhumane prisons, and then subjected to prolonged physical and psychological abuse.”