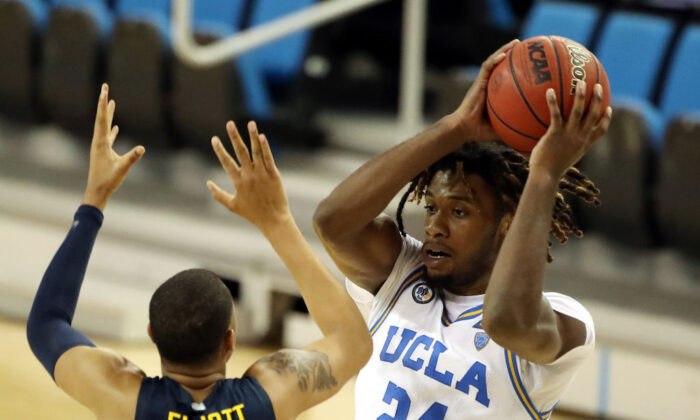 Jalen Hill #24 of the UCLA Bruins defends the rebound against Greg Elliott #5 of the Marquette Golden Eagles during the second half at UCLA Pauley Pavilion in Los Angeles on Dec. 11, 2020. (Katelyn Mulcahy/Getty Images)
Southern California

LOS ANGELES—Former University of California–Los Angeles (UCLA) power forward and center Jalen Hill has died after going missing in Costa Rica, his family announced. He was 22.

“We know Jalen has played a part in the lives of so many people,” the family wrote on Sept. 20. “We also acknowledge the role that so many of you have played in his. As we try to navigate this devastating time in our lives, we ask that you please give us time to grieve. Keep us in your thoughts and prayers.”

Hill was a star at Centennial High School in Corona, leading the Huskies to the CIF (California Interscholastic Federation) Southern Section Regional Division I championship game as a senior in 2017. He was ranked as the No. 47 player nationally in his high school class by ESPN.com.

“I’m so stunned I don’t even have an emotion right now,” Josh Giles, Hill’s coach at Corona Centennial told the Los Angeles Times. “To hear something like this is next-level devastating.”

“Jalen was a warm-hearted young man with a great smile who has left us far too soon,” Cronin said in a statement.

Hill played his last game for the Bruins on Jan. 30, 2021, going scoreless in 11 minutes against Oregon State. The team announced the following week that he was sitting out a game against USC for personal reasons.

Hill later said the reason why he never came back to play was due to anxiety and depression after putting excessive pressure on himself to succeed.

“It was a tough decision to make, but once I knew what I had to do, it wasn’t hard, like I figured out, like, this is going to help me,” Hill told The Times in a 2021 interview.

Hill was among three UCLA freshmen arrested for shoplifting when the Bruins were in Hangzhou, China to open the 2017–18 season and remained at the team’s hotel until their case could be resolved. Hill, LiAngelo Ball, and Cody Riley publicly apologized upon their return to campus and thanked everyone involved in helping to resolve the case so they could return home, including then-President Donald Trump.

“There’s just no other way to put it,” he said. “And I’m not that type of person. I hope that this mistake will not define me as a person, but it shows that I have messed up and can learn from it. I don’t want to be known for this dumb mistake. I want to be known for my respectfulness and my love and passion for the game of basketball. This event has changed me in a way I can’t explain.”

The three players were initially suspended indefinitely from the team while they went through the university’s disciplinary review process. Ball withdrew from school before the review was completed. Hill and Riley remained suspended through the remainder of the season.