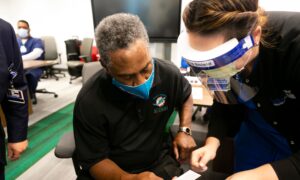 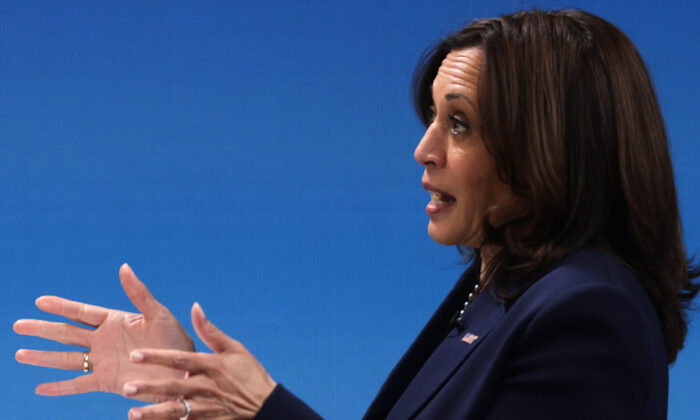 In an interview on Sunday, Vice President Kamala Harris ​claimed that the Biden administration is starting from scratch to develop a ​national ​vaccine distribution plan​, ​challenging last month’s comments from the director of the National Institute of Allergy and Infectious Diseases (NIAID), Dr. Anthony Fauci, and receiving push back from former Trump administration officials.

“You know what I explained to the mayors, there’s no stockpile, right? It’s, in many ways—no stockpile of vaccines. Right? So, we’re looking at this, there was no national strategy or plan for vaccinations. We were leaving it to the states and local leaders to try and figure it out,” Harris told “Axios on HBO” Sunday.

“And so, in many ways, we’re starting from scratch on something that’s been raging for almost an entire year,” added Harris.

Former Health and Human Service’s Chief of Staff Brian Harrison responded to the vice president’s claim that they were starting from scratch with the vaccine distribution effort.

“Finally, if interested, here’s a photo of us briefing President Trump on “the plan”, along with Dr. Fauci, Dr. Birx, Dr. Slaoui, General Perna, Dr. Collins, and others. We had to start from scratch, your team didn’t. #plandenier @VP@Axios@mileallen,” wrote Brian Harrison on Twitter.

“Also, we were vaccinating just under a million people per day in mid-January, when President Trump was still in office. So, this is garbage. Twitter.com/axios/status/1” wrote, Williamson.

In the days before Biden’s inauguration, states had reported having vaccinated about 1 million Americans per day. This happened five weeks after the Moderna and Pfizer vaccines received their emergency use authorization.

In January, Fauci confirmed what the former Trump officials said about vaccine distribution. At a White House press briefing he credited the Trump administration with having distribution started, adding that the Biden administration is “amplifying” the plan.

“No, I mean, we certainly are not starting from scratch because there is activity going on in the distribution,” Fauci told reporters.

“But if you look at the plan that [Biden] has put forth about the things that he’s going to do—namely, get community vaccine centers up, get pharmacies more involved; where appropriate, get the Defense Production Act involved, not only perhaps with getting more vaccine, but even the things you need to get a good vaccine program—for example, needles and syringes that might be more useful in that,” Fauci continued.

When pressed about Biden’s comment that the plan left was “abysmal,” Fauci disagreed.

“No, I mean, we’re coming in with fresh ideas, but also some ideas that were not bad ideas with the—with the previous administration. You can’t say it was absolutely not usable at all. So, we are continuing, but you’re going to see a real ramping-up of it,” Fauci added.

The vice president’s office did not immediately respond to a request for comment.