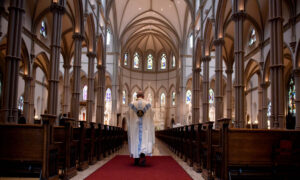 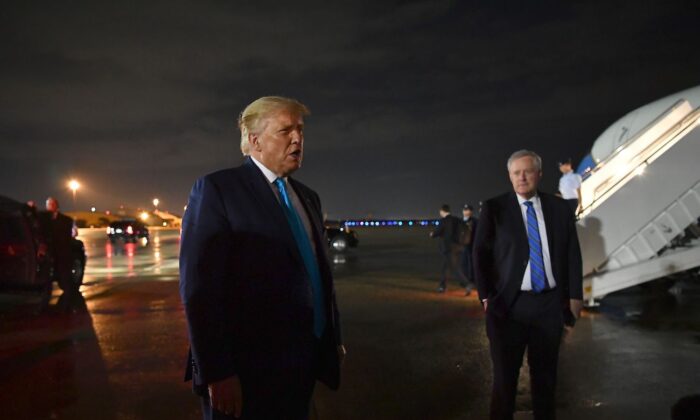 President Donald Trump, next to White House chief of staff Mark Meadows, speaks to reporters upon arrival at Andrews Air Force Base in Maryland on Sept. 3, 2020. (Mandel Ngan/AFP via Getty Images)
Politics

During an appearance on “Fox & Friends,” Meadows—who served as Trump’s final chief of staff—downplayed the remarks Trump gave to a group of supporters on Jan. 6. Trump himself said that he believes his remarks were fine and did not incite violence.

“When we start looking at the rally, we’re focused more on that than we are really about what we need to be focused on today,” Meadows said on Wednesday morning. “When we start to look at America, it needs to be about what is important to people on Main Street and that’s what the president did. He put America first … hopefully we’ll get beyond this.”

Although Trump told supporters to march to the Capitol, he did not tell them to use violent means. A riot ensued and forced the evacuation of the House and Senate, triggering a House vote to impeach the president. The Senate, however, likely will not convict the former president after the vast majority of GOP senators voted against holding the impeachment trial in a procedural vote on Tuesday night.

“There was a vote yesterday in the senate that suggested that 45 senators said that it was unconstitutional,” Meadows said, referring to the procedural vote that was introduced by Sen. Rand Paul (R-Ky.). “Let’s get on and be focused on what is important to the American people.”

Meadows and other Republicans have dismissed the second impeachment trial as “dead on arrival.”

“If today’s Senate vote is any sign, the Democrats’ ridiculous impeachment of former President Trump will fail—again—by a long shot. Dead on arrival,” Meadows wrote on Twitter. “Good for [Rand Paul] and the 45 GOP Senators for standing up.”

The GOP senators said that it goes against the Constitution to convict a former president in an impeachment trial, while arguing that it will not serve to unify the United States.

For his part, Trump has issued few statements since Jan. 20’s inauguration but told the Washington Examiner last week: “We’ll be back in some form.” He also set up the Office of the Former President website.

Separately, Meadows was hired by the Conservative Partnership Institute on Wednesday. The group is a conservative networking firm headed by former Rep. Jim DeMint (R-S.C.).

“Mark is one of the most widely respected conservative leaders in [the] country, and we couldn’t be more excited for him to join our team to support and build the conservative movement,” DeMint said in a statement on its website.