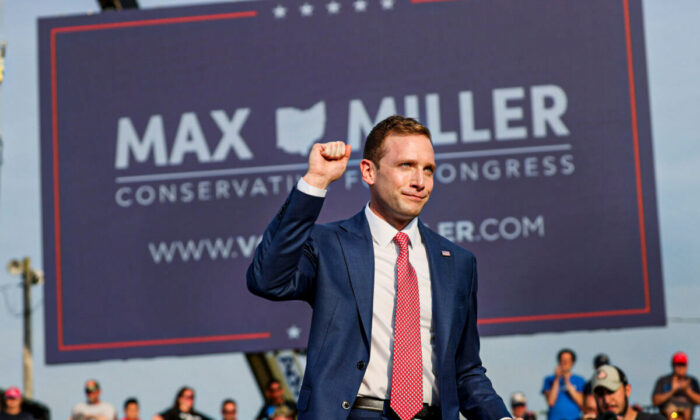 Former Trump aide Max Miller on Friday announced that he is shifting his campaign to Ohio’s newly-formed 13th congressional district after his own district was eliminated through redistricting.

Miller lives in the newly formed district and said in a statement that it makes up a large portion of where he has been campaigning.

“The District number may be changing, but my campaign to advance America First policies—policies that lower taxes, secure the southern border, and make our communities safer—will persist,” Miller said.

Miller received Trump’s endorsement in February when the former aide mounted a primary challenge against Rep. Anthony Gonzalez. Gonzales was one of the 10 House Republicans who voted to impeach Trump; he announced his retirement in September.

Ohio lost a congressional seat as a result of the 2020 Census. State Republicans redrew the maps and approved the new plan on Nov. 18, according to Cleveland.com.

The new 13th congressional district includes the heavily Democratic city of Akron, making it a competitive district for the 2022 election.

“These maps are an insult to Ohioans and the Republicans who drew them know it,” Rep. Tim Ryan (D-Ohio) wrote on Twitter.

Democrats are gearing up for a tough 2022 election, facing inflation and a stagnant economic recovery.

Miller served as an aide on Trump’s 2016 campaign and went on to serve in several roles in the Trump administration and Trump’s 2020 campaign.

In endorsing Miller, Trump said he “is a wonderful person who did a great job at the White House and will be a fantastic Congressman.”

With the retirement announcement by Gonzales, 8 of the 10 Republicans who voted to impeach Trump are still in the running for the 2020 midterm elections.