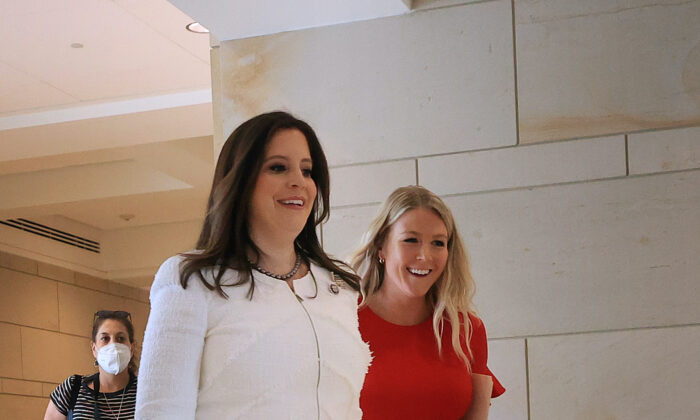 Rep. Elise Stefanik (R-N.Y.) leaves a meeting with Karoline Leavitt where she was elected House Republican conference chair in the U.S. Capitol Visitors Center in Washington, on May 14, 2021. (Chip Somodevilla/Getty Images)
2022 Midterm Elections

Karoline Leavitt, a 25-year-old former aide to the Trump White House, has won the Republican primary for a key swing U.S. House district in New Hampshire, beating Matt Mowers, a former state GOP chair and candidate for the seat in 2020.

Leavitt, a first-time candidate, struggled during the initial days of the campaign but soon outdistanced nine other GOP candidates in New Hampshire’s 1st Congressional District. She won with 15,290 votes, 33.4 percent, leading Mowers who got 11,650 votes.

Leavitt will now face incumbent Rep. Chris Pappas (D-N.H.), in November’s general election in what is considered to be a tight race.

Former President Donald Trump did not officially endorse either candidate.

Leavitt was a presidential writer and later served as assistant press secretary under Kayleigh McEnany, and is only the second Gen-Z candidate to win a House primary.

Spending more than a million dollars on the ad, the Super PAC added that Leavitt “worships Fauci’s mask mandates,” and called her “woke, immature, and irresponsible.”

Leavitt has been reportedly more vocal than Mowers regarding the 2020 election, voicing her support for former President Donald Trump. “I consistently continue to be the only candidate in this race who said that I believe the 2020 election was undoubtedly stolen from President Trump,” Leavitt said, according to CNN.

‘Democrats Certainly Counted Us Out’

Leavitt said in a victory speech, published on Facebook, “More than 1 year ago, I got into this race with no name recognition, no money, but a passion and a drive to fight for my home state of New Hampshire against the socialist democrats who are destroying our country. The media, the Washington establishment, and the Democrats certainly counted us out.”

“Our Democrat opponent Chris Pappas is an expert at the typical Washington D.C. political game—pledging to be for one thing but voting for another.”

Regarding inflation, Leavitt said, “This economic crisis is a direct result of the policies that Chris Pappas has consistently supported, voting to conceal trillions and trillions of our tax dollars over the past 2 years alone.

“And how do Chris Pappas and the democrats promise to fix their manufactured economic crisis? By spending more of our money, raising our taxes, and hiring 87,000 IRS agents to look into small businesses. To that, we say—Hell No,” she said to cheers from supporters.

Dante Scala, a University of New Hampshire political science professor, said, “Her compass always points to Trump,” according to Newsmax. “She, in a very kind of crisp, sharp, confident way, will say the most MAGA thing that can be said in any situation.”

In a concession statement, Mowers said he will “never stop fighting for those middle-class families to make sure they are not forgotten.”

Republicans need five more seats to regain a majority in the House, which they lost in 2018. The GOP has high hopes for New Hampshire’s First District which stretches from the Massachusetts border, and the Seacoast region, up through the Lakes region and into the White Mountains.