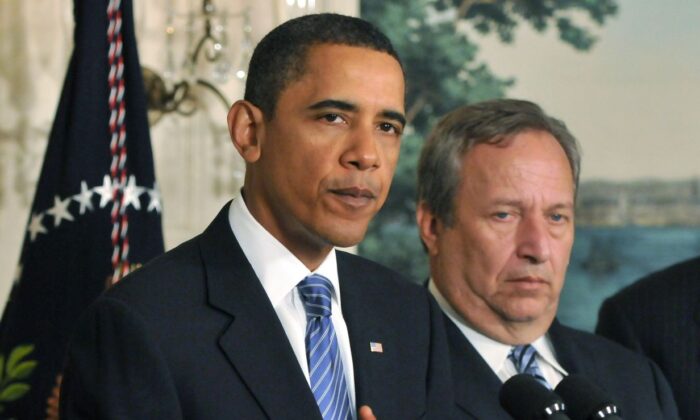 President Barack Obama (L) speaks about the financial crisis responsibility fee in the Diplomatic Reception Room at the White House in Washington with Larry Summers at his side on Jan. 14, 2010. (Ron Sachs/Getty Images)
Economic Policies

Larry Summers, who served as treasury secretary under President Bill Clinton, has said the Federal Reserve failed to anticipate current inflation levels and that price increases can only be arrested by “dislocation” of the economy.

“Frankly, I think in 2021, our central bank lost its way,” Summers said in a July 15 interview with Bloomberg’s “Wall Street Week,” adding that central bankers were more concerned about the environment and social justice than about inflation, which they “confidently dismissed” as transitory.

“Our central bank let us down quite badly, and as a consequence, they find themselves in a very, very difficult position, not least because they don’t have the credibility that they once enjoyed, given their repeated poor forecasting record,” Summers said.

The problem with the Fed is not something “that’s been fully fixed,” he added. Summers pointed to the Fed’s prediction that unemployment will only rise to 4.1 percent even as inflation comes completely down, something which he called “highly implausible.”

In an interview with CNN on July 13, Summers predicted inflation to be lower in 2023 compared to 2022, with the yearly decline continuing in 2024. However, he does not believe it’s “going to be easy” to bring inflation back to levels that Americans have been accustomed to in recent decades. This would necessitate a “quite significant dislocation in the economy.”

While Summers praised the Fed for signaling that it intends to act against inflation, he said the Fed’s response is much later than it should have been, and that there will be a substantial cost because of that.

Inflation might get worse in the coming months according to Sen. Bill Hagerty (R-Tenn.). In an interview with Fox Business, he blamed the Biden administration for “shoving through” the $2 trillion American Rescue Plan in March 2021 and triggering inflationary pressures.

“There is still a great deal of inflation baked in because of the money that still lies in the coffers of these state and local governments that has not yet been put into the economy. When it does come in, it can only do one thing, more upward pressure on prices, more inflation,” he warned.

According to Bryce Doty, senior vice president and senior portfolio manager at Sit Investment Associates, the Fed’s actions will only exacerbate the problems facing the economy.

In a July 12 note, he pointed out that the Fed made a “clear mistake” by raising rates and destroying demand at a time when businesses were desperately looking for workers. This would only “further extend” supply shortages, he said.

“Just think of the incredible growth we would have if another 2 [million] to 4 million workers re-entered the workforce. Supply shortages would dry up and inflation pressures would dissipate. Instead, the Fed’s actions will slow growth and inflation will persist longer than it should,” Doty said in the note.