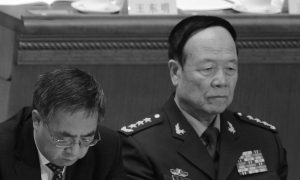 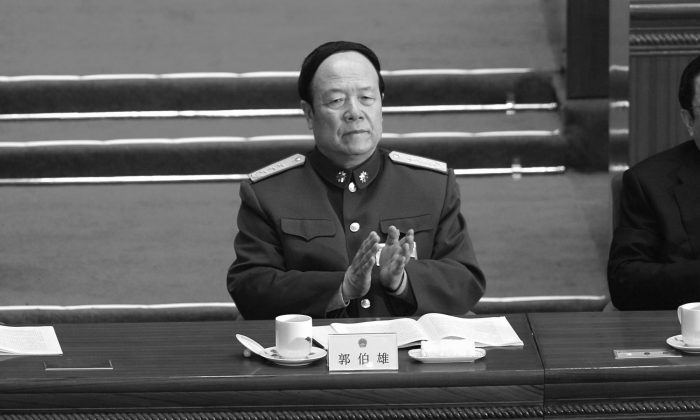 In this file photo, General Guo Boxiong, vice chairman of China's Central Military Commission, attends the opening session of the National People's Congress, on March 5, 2007 in Beijing, China. According to Apple Daily, Guo has been detained for interrogation in a corruption investigation. (Andrew Wong/Getty Images)
China

A man who for ten years was one of the top officers in China’s military has been taken away by army officials for secret interrogation, according to Hong Kong’s Apple Daily.

Guo Boxiong served from 2002 to 2012 as one of two vice chairman—the seconds in command—of the Central Military Commission (CMC), which controls China’s military. He has been placed under “shuanggui,” an abusive interrogation procedure the Party reserves for its own members.

Guo, his secretary, and his son, Guo Zhenggang, who is a major general, were all taken away by the People’s Liberation Army (PLA) Procuratorate, the unit responsible for investigating and prosecuting crime.

Besides selling military posts, Guo would surely have gotten kickbacks from the purchase of any military goods.
— Heng He, China expert

The fact that they were taken away by the military judicial branch, and not by the Commission for Discipline Inspection, showed the seriousness of the potential crimes involved, according to Apple Daily. The Commission for Discipline Inspection focuses on political offenses and hands criminal offenses off to the judicial authorities for prosecution.

“Besides selling military posts, Guo would surely have gotten kickbacks from the purchase of any military goods, since Guo originally came from the General Staff Department,” said Heng He, an expert on China’s politics in an interview with New York-based New Tang Dynasty Television.

Guo served as the deputy director of General Staff Department between 1999 and 2002.

“When Guo became the vice chairman of CMC, he had even a greater say (in weapon procurement),” said Heng.

In a previous interview with Epoch Times, the political commentator Wen Zhao said the CMC is headed by two vice chairmen who must both give their consent before a military general is promoted.

Ever since Xu Caihou, who also served as vice chair of the CMC, was purged on June 30, 2014, Guo’s fall has been widely anticipated.

Both Guo and Xu were granted their military posts by former Chinese Party leader, Jiang Zemin, who continued to exercise influence over personnel and policy even after he left office in 2004.

The biggest of “big tigers”—high-ranking CCP officials—purged during Party head Xi Jinping’s anti-corruption campaign have all been allied to Jiang, as Xi has sought to eliminate the influence of Jiang’s faction within the Party. The purging of Guo is another step in this direction, and leaves Jiang yet more isolated as his former cronies and allies are removed one after the other.