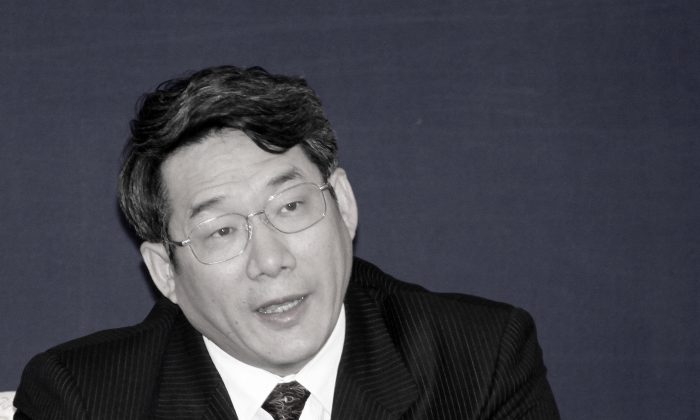 In this April 29, 2009 file photo, Liu Tienan, then the vice chairman of the National Development and Reform Commission, speaks during a press conference in Shanghai. ( AP Photo/Eugene Hoshiko, File)
China

Liu Tienan, the former deputy chief of the Chinese regime’s economic development agency, and the former head of its energy administration, will be spending the rest of his life behind bars, according to a recent ruling handed down in a court in Hebei Province.

Liu, 59, was the deputy head of the National Development and Reform Commission, a powerful body that grants permissions and directs funds to large economic projects around China.

Liu was also former chairman of the National Energy Administration.

During his tenure at these two agencies, he was accused of taking 35.6 million yuan ($5.8 million) in bribes, from 2002 to 2012, either personally or through his son, Liu Decheng.

The trial, in which Liu was reportedly a remorseful and honest actor, ended in September, but the court spent two months deliberating the verdict.

Liu’s plaintive confessions–“How did I end up like this?” he reportedly told the court, in tears–were spread on the Communist Party’s social media accounts.

The accusations said that Liu abused the power of his posts to gain profit for himself and his son. The son, Liu Decheng, received a massive amount of bribes, including millions of shares in a car trading firm, a luxury villa, and a Porsche, along with cash and a job in which he received a substantial salary to do nothing.

Liu’s scandal became public news in December of 2012, exposed by an editor with the business magazine Caijing. He was put under investigation the following year and by August was purged from the Party.

Political insiders in China have told the Epoch Times that Liu was considered the “finance manager” for Jiang Zemin’s political network. Jiang is the former leader of the Chinese Communist Party, whose formal reign ended in 2002, but who continued to pull strings and wield vast influence over the following decade. As the “safekeeper” of the energy sector for Jiang and his people, Liu was able to extract vast rents from that industry and funnel them to Jiang and his allies, the same Party insiders said.