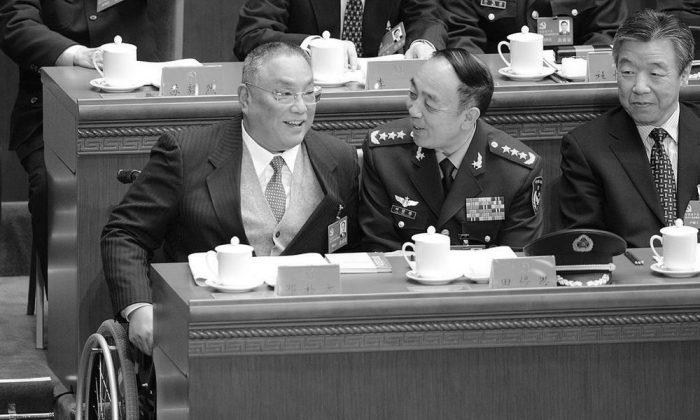 Tian Xiusi, the former political chief of the Chinese Communist Party’s airforce, enjoyed a series of connections to elite political figures that allowed his career to prosper. His only problem was, they were the wrong figures.

With a July 9 announcement that he was under investigation, Tian is the latest retired military official to be purged for his association with a political faction that has opposed Party leader Xi Jinping.

Tian, 66, will now been handed to the People’s Liberation Army’s internal disciplinary unit on suspicion of corruption, according state mouthpiece Xinhua. His wife and secretary were also taken away, according to Beijing Daily, a semi-official Chinese publication.

Tian’s most recent occupation, after his retirement from the military last August, was deputy director of the Foreign Affairs Committee of the National People’s Congress, the regime’s faux legislature.

Tian is one of the highest ranking former Chinese military officers to be investigated for corruption since Xi Jinping took office in 2013. Guo Boxiong and Xu Caihou, both former vice chairs of the Central Military Commission, and patrons of Tian, have also been probed and purged.

Then in October 2012, Tian was promoted to political commissar of the People’s Liberation Army’s air force—an unusual appointment at the time because Tian only had experience commanding ground troops.

It appears that Tian had secured his promotions through bribery, according to a recently published book by a former official who worked in a department linked with the old Lanzhou Military Region.

Chen Xi, the author of “The Autobiography of Guo Boxiong,” wrote that Tian had paid former military vice chair Guo Boxiong 50 million yuan (about $7.5 million) in 2012 to be the air force’s political commissar, according to Radio France International. Tian had also bribed Xu Caihou, the other military vice chair, to get the Chengdu job. Both Guo and Xu oversaw all promotions and appointments in the Chinese military during their tenure as vice chairs of the military.

Guo has been expelled from the Party for corruption in July 2015, and is currently awaiting trial. Xu passed away from bladder cancer in March 2015, but otherwise would almost certainly have been prosecuted.

Tian Xiusi also appears to have been something of an ally of Bo Xilai, the ambitious former Politburo member and chief of southwestern megapolis Chongqing.

After Tian’s investigation was announced, popular Chinese news website Netease declared in a headline that the former air force political chief had “frequent meetings” with Bo, though the report itself did not elaborate.

Overseas Chinese media offer more detail of the Tian-Bo connection. While Tian was still the political commissar of the old Chengdu Military Region in 2012, he issued an article that was widely interpreted to be supportive of Bo Xilai’s “red” political campaign in Chongqing, according to overseas Chinese news website Duowei News.

Tian’s article was issued in April that year, merely two months after Bo’s former ally Wang Lijun attempted to defect to the United States Consulate in Chengdu spilling details of what is believed to have been a coup plot featuring Bo Xilai and then security czar Zhou Yongkang.

In a 2015 speech, Party leader Xi had implied that Bo Xilai, Zhou Yongkang, Xu Caihou, and two others had “carried political plot activities” to “wreck and split” the Communist Party. These disgraced elite cadres are known to be part of a rival political network grouped around former Party chief Jiang Zemin.

Given Tian Xiusi’s connections to Jiang’s loyalists, it would appears that his purge is part of Xi’s attempt to root out Jiang’s influence in the military and the Party, and consolidate his control over the regime.