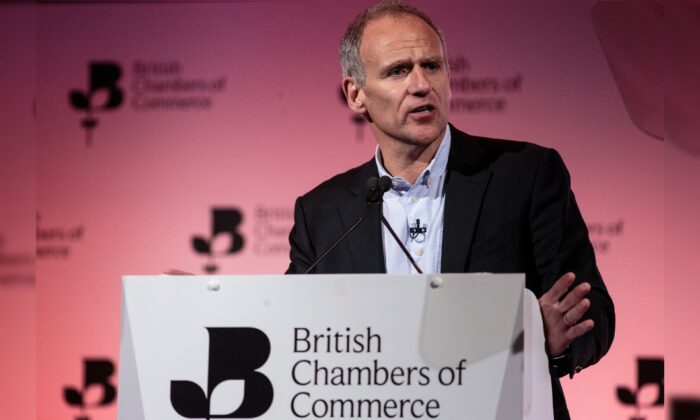 Dave Lewis, then CEO of Tesco, speaks at the annual British Chambers of Commerce conference in London, on March 28, 2019. (Jack Taylor/Getty Images)
UK

British Prime Minister Boris Johnson has appointed a former boss of supermarket chain Tesco as an advisor to help solve the supply chain crisis that has led to shortages of fuel and other goods in the UK.

Downing Street announced on Friday that Sir David Lewis, former CEO of Tesco, has been appointed as the UK government’s supply chain adviser.

Lewis will advise the prime minister and cabinet minister Steve Barclay “on both immediate improvements and any necessary long-term changes to UK supply chains for goods, and will work with government officials to quickly resolve acute, short term issues,” the Prime Minister’s Office said in a statement.

He will also co-chair a new supply chain advisory group and will be based in the Cabinet Office.

Johnson said he was “pleased” that Lewis is joining the team to solve the problems in the supply chains.

“There are currently global supply issues which we are working with industry to mitigate and Dave brings a wealth of experience which will help us continue to protect our businesses and supply chains,” he said.

Britain is in the midst of a supply chain crisis triggered by a shortage of around 100,000 HGV drivers, which, along with Brexit, has been further exacerbated by people leaving the industry as well as the COVID-19 pandemic, which halted driver training and testing for nearly a year.

The government was forced to deploy the armed forces to restore fuel supplies across the nation after panic buyers raced to forecourts to fill their cars, leading to lengthy lines at petrol stations and shortages across the country.

Newly released official figures show that around one in six adults in Britain have been unable to buy essential food items in the last fortnight.

Some 17 percent of adults said they had not been able to buy essential food items because they were not available, according to the Office for National Statistics (ONS). Almost a quarter (23 percent) said the same for non-essential food items.

Six in 10 respondents to the ONS survey said their food shopping experience had been different from usual, with 43 percent saying there was less variety, and 14 percent reporting they had to go to more shops to get what they needed.

Medical supplies have also been affected. Some 13 percent of adult respondents reported waiting longer for prescriptions, and 4 percent said they had to go to more pharmacies to find what they needed.