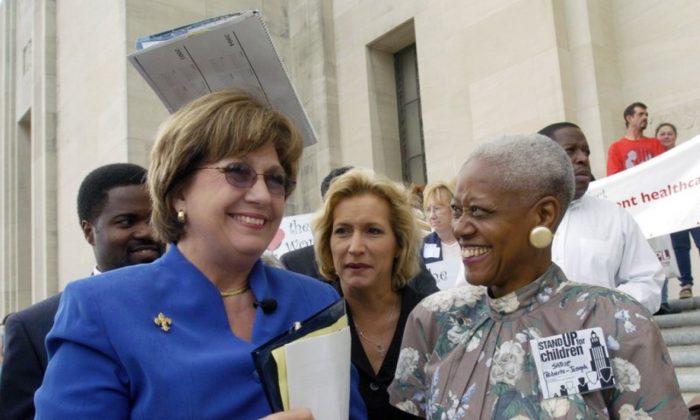 Gov. Kathleen Blanco, left, talks with Sadie Roberts-Joseph, right, before the start of the Stand Up for Children 2004 Rally on the steps of the State Capitol in Baton Rouge, La., on April 20, 2004. (Arthur D. Lauck/The Advocate)
Crime and Incidents

A man has been arrested and charged with the murder of Sadie Roberts-Joseph—the founder of the African-American museum in Baton Rouge. Roberts-Joseph was found dead in her car trunk in Louisiana.

Bell reportedly owed Roberts-Joseph several months worth of unpaid rent, worth about $1,200, at the time of her murder, reported WAFB 9.

The pair reportedly had an agreement where the 38-year-old could stay in one of Roberts-Joseph’s rental homes as long as he paid her some money, an arrest warrant details.

The Louisiana activist’s body was discovered in the trunk of her car at around 3:45 p.m. on Friday, after police got a mysterious call about a car in the 2300 block of Adams Avenue, about three and a half miles away from her home according to WAFB 9.

The 38-year-old was reportedly in jail for failing to register as a sex offender and had served a seven-year sentence after he pleaded guilty to sexual battery of an 8-year-old girl in 2007, reported WAFB News. He was released from jail on April 12, 2013.

The motive behind Roberts-Joseph’s murder is still under investigation, but investigators do not believe the death was a hate crime.

In 2017, Baton Rouge’s murder rate exceeded that of many large U.S. cities, including Chicago, according to The Advocate.

“Following the lowest year for homicides in a decade, East Baton Rouge Parish rebounded in 2017 with a historical high of 106 killings, easily toppling the former record of 96 homicides in 2007,” said the report.

And in 2018, there were 87 homicides recorded in East Baton Rouge Parish; the paper reported earlier this year.