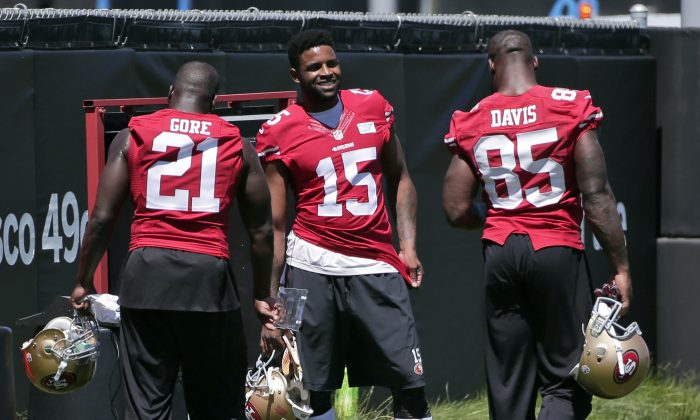 He said he didn’t want to offer his opinions on Kaepernick’s protest.

“I’ve let it be known I don’t have anything to do with him,” said Crabtree. “I’m a Raider.”

Crabtree’s teammates—linebackers Malcolm Smith and Bruce Irvin—raised their fists during the anthem before Sunday’s game against the Tennessee Titans.

Crabtree and Kaepernick had been teammates on the 49ers from 2011 to 2014. They were key components of the 2012 49ers team that got to Super Bowl XLVII before losing 34-31 to the Baltimore Ravens.

Apparently, the two weren’t on the best of terms when Crabtree left the 49ers. “I needed new scenery,” Crabtree told the San Francisco Chronicle in September 2015. “It wasn’t for me. I needed a quarterback that can deliver the ball, and that was hungry like I was.”

“Nah, I haven’t talked to him since I left,” Crabtree said, referring to leaving the 49ers. “I hope he gets in those books and watch that film and know what he’s doing out there.”