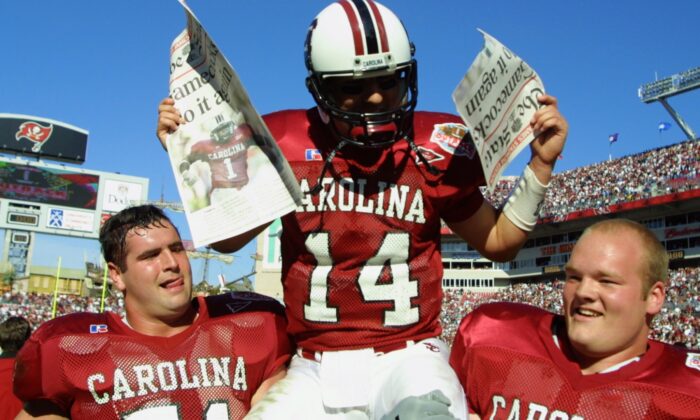 South Carolina quarterback Phil Petty, #14, is carried off the field by teammates after beating Ohio State 31-28 in the Outback Bowl at Raymond James Stadium in Tampa, Fla., on Jan. 1, 2002. (Scott Halleran/Getty Images)
Sports

Phil Petty, a former University of South Carolina Gamecocks quarterback, died last week after suffering from an unspecified illness, according to multiple reports. He was 43.

Petty played for the Gamecocks from 1999 to 2001 and “made a huge impact” on the football program, the school said in a news release, offering condolences to the South Carolina native and his family.

“He was a fighter on the football field, a tremendous person off the field and beloved by all Gamecocks,” Tanner added. “He was a great friend to many and a wonderful dad and husband. My prayers go out to his wife, Morgan, children, Sage and McCoy, and his many friends.”

Our hearts are heavy as we mourn the loss of a great Gamecock. pic.twitter.com/c5WsganUkj

Petty was a 3-year starting quarterback for the University of South Carolina Gamecocks football squad and ended his career for the team with 861 pass attempts—the fourth-most in program history.

In 2000, the college football legend took over the job full time and kept that role throughout his junior and senior seasons. He played under famed head coach Lou Holtz, assisting the team to a pair of consecutive Outback Bowl titles after they hadn’t made an appearance for the edition in years.

The Gamecocks’ 8-win campaign in 2000 came after a winless season in 1999, becoming one of the biggest turnarounds in National Collegiate Athletic Association (NCAA) Division I history.

In 2001, Petty was named a finalist for the Johnny Unitas Award, given to the nation’s top quarterback.

During his four seasons with the redshirts, he had 454 pass completions, 5,656 passing yards, and 28 touchdown passes. He then spent one season in the NFL as a backup for the Tennessee Titans before moving into coaching.

“He followed his love of football to the coaching profession following his playing career,” the USC said. “He was an offensive coordinator and quarterbacks coach at Hammond Academy during the 2003 season before joining the Gamecock coaching staff as a graduate assistant for the 2004 season.”

While Petty’s official cause of death hasn’t been revealed, Columbia, South Carolina, newspaper The State reported that he died following a “brief illness.”

The quarterback’s wife, Morgan, wrote a tribute on Facebook, saying she could have never imagined going to the hospital and not bringing her husband back home.

“Never could I imagine a heart could hurt this bad,” she wrote. “We were about to start a new beginning and create so many more memories together. We still had so much to do and I don’t know why you had to leave us so soon.”

“As I sit here and read all the tributes made to the love of my life it makes me so proud and honored to have you as my husband,” she added. “I will continue to instill the qualities that I watched you teach our babies and make sure that they carry on what you left behind. I will make sure our kids remember everything about you and I will share with our grandchildren just how great their grandpa was.”

Petty is survived by his wife and two children, Sage and McCoy.