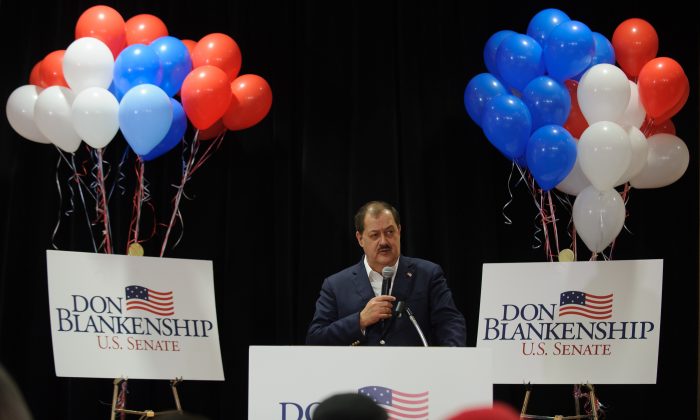 A former coal executive is suing a slew of media outlets and an arm of the Republican Party for defamation, claiming they falsely labeled him a felon to sabotage his campaign last year for the U.S. Senate in West Virginia.

The plaintiff, former candidate Don Blankenship, finished third in the May 8, 2018, GOP primary with 20 percent. The winner, Patrick Morrisey, won 34.9 percent, followed by Evan Jenkins at 29.2 percent. Morrisey went on to lose to the Democrat incumbent, Sen. Joe Manchin, 49.6 to 46.3 percent, in the Nov. 6 general election.

Days before the primary vote, Blankenship was polling slightly ahead of his rivals, The Hill newspaper reported May 7, 2018, in an article titled, “Polls show Blankenship ahead, sparking panic among GOP.” Around that time, President Donald Trump said in a tweet that Blankenship “can’t win” the general election and urged GOP voters to support Morrisey or Jenkins. Blankenship fought back, saying, “some have said I am Trumpier than Trump.”

Eric Early, who represents Blankenship in the lawsuit filed in Mingo County, West Virginia, said this “is a groundbreaking defamation case punctuated by collusion to interfere in a federal election by major media outlets and high-ranking United States senators. There has never been a case like this that clearly exposes the swampy D.C. elite.”

Blankenship named both Andrew Napolitano, who is a Fox News commentator, and Fox News network as defendants in the suit.

The false claim that Blankenship, who had been the longtime CEO of Massey Energy, was a “convicted felon” or had “gone to jail for manslaughter,” appeared in the media repeatedly during the primary campaign, according to the legal complaint filed March 14.

On his watch, there was a tragic explosion in 2010 that killed 29 miners at Massey’s Upper Big Branch Mine, the complaint stated, but ill-considered regulations caused the incident, which occurred mere hours after “ventilation changes” the Obama administration required were implemented “which cut the mine’s airflow in half.”

In a trial the complaint stated was rife with prosecutorial misconduct, a jury nonetheless acquitted Blankenship in 2015 on all felony counts related to the explosion, but convicted him of conspiracy to violate mine safety laws, a misdemeanor. He received one year in prison and was the only misdemeanant in custody at the correctional facility, the complaint stated.