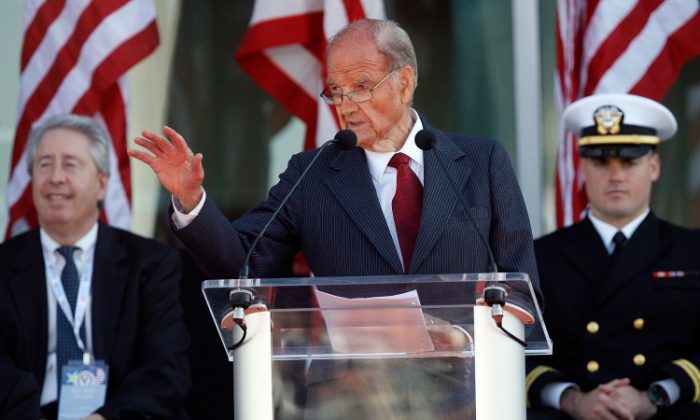 George McGovern speaks during the National World War II Museum Dedication Ceremony in this file photo in New Orleans, La. McGovern's family said that the former senator is on life support, but "no longer responsive." (Sean Gardner/Getty Images)
US

Former Democratic senator and presidential candidate George McGovern is on life-support, but is “no longer responsive,” his family said Wednesday.

McGovern, 90, was taken to the hospital in Sioux Falls, S.D., on Monday “with a combination of medical conditions, due to age, that have worsened over recent months,” his family said in a statement to Reuters.

“The senator is no longer responsive. He is surrounded by his loving family and close friends,” the statement reads.

McGovern is probably best known for his failed presidential bid against President Richard Nixon in 1972. Nixon later resigned over the Watergate scandal.

McGovern, who was the son of a Methodist minister, served South Dakota as a senator from 1963 to 1981. Before that, he was a member of the House of Representatives from 1957 to 1961.

During World War II, McGovern flew a B-24 bomber conducting combat missions over Europe. He earned the Distinguished Flying Cross.

His daughter, Ann McGovern, told The Associated Press on Monday: “He’s coming to the end of his life,” without elaborating.