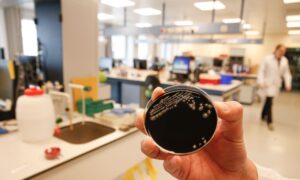 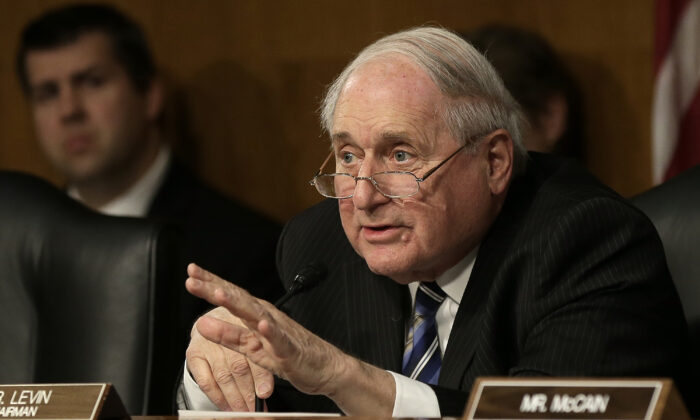 Sen. Carl Levin (D-MI) questions a witness during a hearing of the Permanent Subcommittee on Investigations of the Senate Homeland Security and Governmental Affairs Committee in Washington on Nov. 20, 2014. (Win McNamee/Getty Images)
Politics

Former Sen. Carl Levin (D-Mich.), a 36-year veteran of the Senate, has died at the age of 87, his family said late on Thursday.

The late senator’s death was announced by the Levin Center at Wayne State University in Detroit in a statement that described him as a “dearly beloved husband, father, grandfather, brother and uncle, and life-long public servant.”

“For those who were lucky enough to be a part of his early work in Detroit, his decades in the Senate, and beyond, he was an inspirational leader and so much more,” the statement said. “He will be remembered for his relentless intellect and work ethic, his humility, his humor, and his strength of character.”

The statement did not list a cause of death. However, Levin, the longest-serving senator in Michigan history, had been battling lung cancer, a diagnosis he revealed in a memoir published in March this year.

He died at the Henry Ford Hospital in Detroit, surrounded by loved ones, according to family spokesperson Jim Townsend, director of the center.

The Detroit native was elected to six consecutive six-year terms starting in 1978 when he defeated a senior incumbent Republican. He retired in 2015.

Former colleagues took to Twitter to remember Levin, who was among the most liberal members of the Senate.

Sen. Gary Peters (D-Mich.), who succeeded Levin upon his retirement, said the late senator was “one of the finest leaders to have ever served the State of Michigan and our country.”

“He was not only a mentor—he was a personal friend—who will be missed deeply,” Peters said on Twitter.

“He showed that kindness is not weakness, and that you can be powerful while being decent, in fact that’s the only way to serve. May his memory be a blessing,” he said.

Michigan Gov. Gretchen Whitmer, a Democrat, described the late senator as a “champion” for the state, adding: “He devoted his life to public service, and it’s up to us to follow his example. My thoughts are with his loved ones tonight.”

“We are deeply saddened by the passing of Sen. Carl Levin. He was a living legend, always putting the needs of Michiganders ahead of his own,” Michigan Democrats said on Twitter. “Known worldwide as a defender of peace and a champion for good, he represented the best of Michigan.”

Levin was born in Detroit on June 28, 1934. After Harvard Law School, he worked as a civil rights lawyer and public defender before being elected to the Detroit City Council in 1969. He later served as council president before running for the Senate in 1978.

Levin leaves behind his wife, Barbara, whom he married in 1961, and three daughters.

“He had a penchant for seeing the world through the eyes of people who struggled against injustice and was called to hold our democratic institutions accountable to everyone—first as a student activist, then as a young defense attorney, Detroit City Council member, and U.S. Senator,” a family statement reads.

“In whatever he did, he defended the uniquely American proposition that all of us, no matter the color of our skin, how we worship, whom we love, the privilege of our parentage, or the size of our bank accounts, are created equal.”