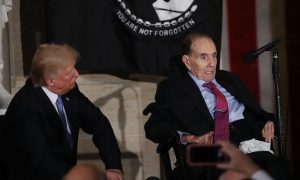 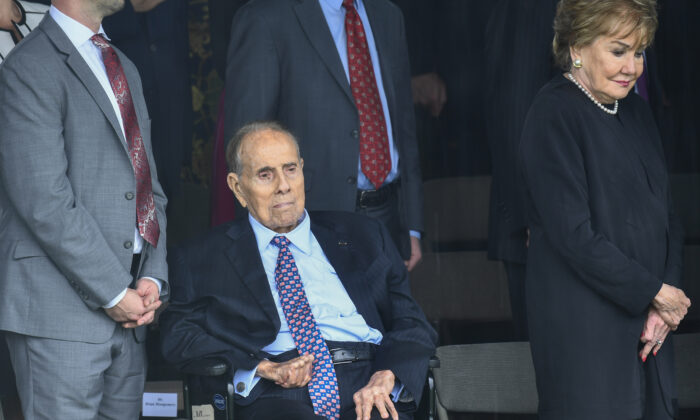 Former U.S. Sen. Bob Dole and his wife Elizabeth Dole wait as President Donald Trump arrives to participate in the Armed Forces Welcome Ceremony in honor of the Twentieth Chairman of the Joint Chiefs of Staff at Summerall Field, Joint Base Myer-Henderson Hall, Va., on Sept. 30, 2019. (Brendan Smialowski/AFP via Getty Images)
Politics

“Recently, I was diagnosed with stage 4 lung cancer,” Dole said in a statement released on Feb. 18.

“My first treatment will begin on Monday. While I certainly have some hurdles ahead, I also know that I join millions of Americans who face significant health challenges of their own.”

Dole, 97, served for decades in Congress, starting with the House of Representatives in 1961. He began representing Kansas in the Senate in the late ’60s, and eventually became Republican leader.

Dole left the Senate for an unsuccessful challenge to President Bill Clinton in the 1996 presidential election. He had also launched two other bids for the GOP nomination, but was defeated in the primaries by Ronald Reagan and George H.W. Bush, respectively.

Dole went on to become a lobbyist and chairman of the World War II Memorial Campaign, among other roles.

He was seen in 2018 in Washington paying his respects to George H.W. Bush at the late president’s funeral.

Dole overcame disabling war wounds sustained near the end of World War II before forging his lengthy political career. While charging a German position in Italy in 1945, Dole was hit by a shell fragment that crushed two vertebrae and paralyzed his arms and legs. The young Army platoon leader spent three years recovering in a hospital but never regained use of his right hand.

He announced his diagnosis just one day after conservative icon Rush Limbaugh died following a one-year struggle with the very same disease.

“We send prayers and love to Senator Bob Dole as he begins his battle with lung cancer. Senator Dole is an American hero and statesman, and we wish him, and his family, strength for the days ahead,” the office of the Kansas secretary of state said in a statement.

“The Pompeos are praying for Senator Bob Dole. A Kansas legend who has served—and continues to serve—Kansas and America. All our love and support to Bob and Elizabeth,” added former Secretary of State Mike Pompeo.