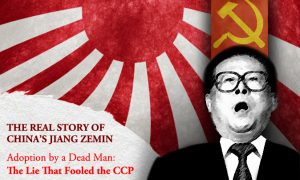 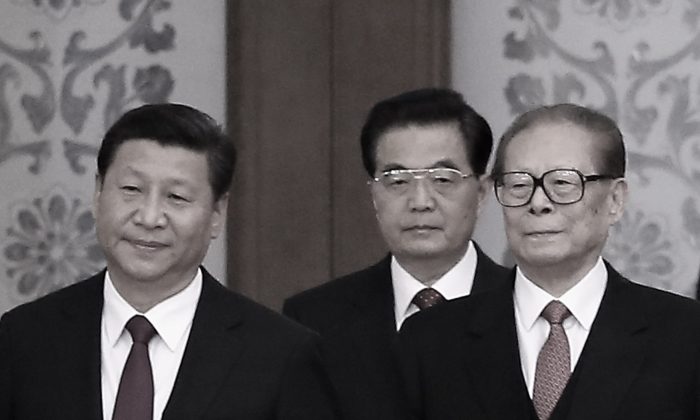 The de-JiangZeminication of the Chinese regime took a big step last week when the indictment of former security czar Zhou Yongkang was announced by the Supreme People’s Court.

Zhou will be tried for bribery, abuse of power, and leaking state secrets. The indictment listed all of Zhou’s many titles from the time he was deputy general manager of China National Petroleum Corporation in 1988 to his retirement in 2012 from the top Party organ—the Politburo Standing Committee—and from heading the Political and Legal Affairs Committee, which previously governed nearly all legal and police matters in China.

The time during which Zhou is alleged to have engaged in criminal activity almost overlaps exactly with Jiang Zemin’s time of being in power in the Chinese Communist Party (CCP), either because he held the top office or informally manipulated things behind the scenes after his retirement.

Jiang became the head of the CCP in 1989, and his political influence subsided dramatically in 2012. Is this overlap between Zhou’s crimes and Jiang’s career a coincidence? Probably not.

Zhou Yongkang’s alleged crimes can be easily divided into three fields, corresponding to three stages. The first period was in the oil industry, from 1988 to 1998. The second period was in Sichuan as the chief of CCP Sichuan Provincial Committee, from 1999 to 2002. The third period was in Beijing as one of the security chiefs, from 2002 to 2012.

The turning point in Zhou’s career was 2002. He was appointed a member of the Politburo at the 16th Party Congress in November and the minister of Public Security the next month.

As a provincial Party chief, Zhou was only one of 200 provincial and ministry level officials, while as a Politburo member, he became one of two dozen core leaders. Since Zhou was also appointed the deputy secretary of the Political and Legal Affairs Committee when he became a Politburo member, it is reasonable to say that in November 2002, his position as minister of Public Security had already been decided. The announcement was just delayed for one month.

It is widely believed that around 2002, Jiang Zemin was not satisfied with the work of Public Security in the persecution of Falun Gong. In 1999, Jiang had launched a campaign to eradicate this spiritual practice.

In 2002, he needed someone with an iron fist that he could trust to take charge of Public Security, which is the main tool used to persecute Falun Gong. Zhou Yongkang’s behavior in Sichuan Province, especially his strike-hard campaign against Falun Gong practitioners, made Jiang believe that he was the best candidate for the job. And he was.

Because of his “achievement” in persecuting Falun Gong, in 2007 Zhou replaced Luo Gan as the Politburo Standing Committee member and as chief of the Political and Legal Affairs Committee. During the 2008 Beijing Olympics, Zhou expanded the power of the security apparatus over a wider population, and thereafter continued the more pervasive use of the domestic security forces with the now notorious Maintaining Stability policy.

Jiang Zemin has two legacies: corruption and the persecution of Falun Gong. Jiang embraced corruption in part as a way of exercising political power.

When Jiang was handpicked by Deng Xiaoping right before the Tiananmen Square massacre, he didn’t have any of the normal qualifications to be the CCP leader. He had no connection with the communist revolution. He had no base in the military. He came from Shanghai, which is a very unpopular place for a politician in China.

To be able to control the whole bureaucracy, Jiang promoted and encouraged corruption to bribe officials into being loyal to him. He also selectively moved against corruption to eliminate his enemies.

Zhou Yongkang’s crimes were encouraged and protected by Jiang’s corruption policy and by Jiang’s need to use Zhou in the persecution of Falun Gong.

Since taking power in November 2012, current Party leader Xi Jinping has moved methodically to  remove Jiang Zemin’s influence in the Party. Trying to erase the influence of a predecessor has precedents in the CCP.

After Mao Zedong took over power, he faced different factions, such as the old leadership sent by Stalin’s Soviet Union and the other Red Army leaders from different areas. Mao initiated a three-year Yan’an Rectification Movement to eliminate those factions and establish his own authority.

When Deng Xiaoping gained power, the discussion on the criterion of truth and the complete negation of the Cultural Revolution helped him to partially eliminate Mao’s influence.

Hu Jintao almost didn’t have a chance to make any change to Jiang’s legacy. In Chinese, people call it “Hu Sui Jiang Gui,” meaning Hu follows Jiang’s rules. Most people believed that during his last year of his term, Hu finally got a chance when Wang Lijun, the police chief of Chongqing City and right-hand man of Bo Xilai, ran into the U.S. Consulate in Chengdu seeking to defect.

With his faction members gone, his legacy of corruption negated, what has Jiang Zemin left?

However, professor David Shambaugh of George Washington University has a different opinion. He believes that since Sept. 17, 2009, the day after the Fourth Plenum of the Party’s 17th Central Committee closed, Hu Jintao reversed the course of reform that Jiang Zemin’s power broker and adviser, Zeng Qinghong, had charted. Zeng served Jiang for more than 20 years and was behind almost every decision, every political move, and every policy Jiang Zemin made following 1989.

Shambaugh may be right that Hu Jintao reversed Jiang’s policies—although one might quarrel with whether those policies constitute “reforms.” However, the policy change was hardly noticed by outsiders because it was not big enough—until Xi Jinping took power.

So far, the targets of Xi’s anti-corruption campaign have been mostly from Jiang Zemin’s faction. Anti-corruption is itself a challenge to Jiang’s legacy.

Now, Zeng Qinghong is in trouble, not only in the policies he promoted, but also in his person. Over the last month, there have been many articles from Chinese-language media and social media both in China and abroad discussing the possible next big tiger to be taken down—Zeng Qinghong.

With his faction members gone, his legacy of corruption negated, what has Jiang Zemin left? The persecution of Falun Gong?

Xi Jinping’s anti-corruption campaign hasn’t been much riskier than the policies of his predecessors. The risk is to the Party itself. The Chinese Communist Party is old and corrupt, and lost direction and steam a long time ago.

The only measure left to the Party is high-pressure suppression, which is why Zhou Yongkang and his Maintaining Stability were so popular in the Party. Nothing can prevent the Party from collapsing, not what Shambaugh called Jiang-Zeng’s reforms, not Xi’s anti-corruption campaign, nor his De-JiangZeminization of the Party.

The desire for liberty and democracy only decides what social system will be established after the collapse of the CCP. That desire will not be the cause of the CCP’s collapse. The CCP has dug its own grave.