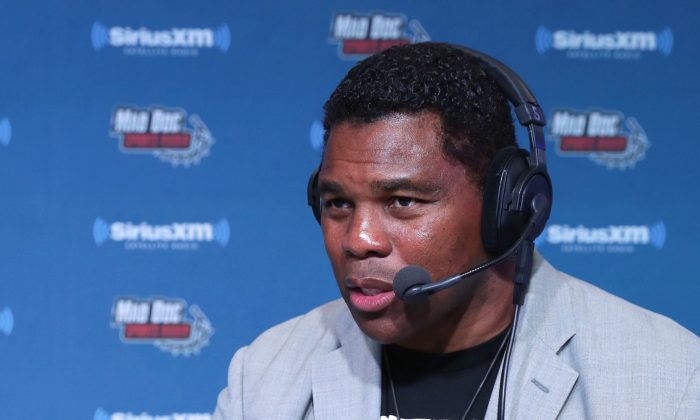 Former NFL star Herschel Walker slammed the league and how it has handled protests during the national anthem.

“I absolutely think the protests are so upsetting, and I blame the commissioner,” he said, the New York Post reported. “I know people are going to be angry when I say it, but he should have stopped the protests at the very beginning.”

Walker, who played for the Minnesota Vikings, New York Giants, the Philadelphia Eagles, and the Dallas Cowboys notably won the 1982 Heisman Trophy while he played for the University of Georgia.

“Guys, let me tell you this,” he said. “Our flag is very special, and black lives matter, but what we should do is go to Washington after the season and protest there instead. We have young men and women fighting for the flag. And we have to respect the White House.”

.@HerschelWalker: "An American hero for me is a military active serviceman or a police officer." https://t.co/k158KiSy5Z pic.twitter.com/LZaOFGPhtl

The protests during the national anthem were started by former San Francisco 49ers quarterback Colin Kaepernick last season, but they’ve continued into this season. President Trump has slammed the league over the protests, saying that game attendance and TV ratings are down as a result of them.

On Monday, Nov. 20, Trump went after Oakland Raiders running back Marshawn Lynch because he sat for “The Star-Spangled Banner” but stood for the Mexican national anthem during a game in Mexico City.

“Marshawn Lynch of the NFL’s Oakland Raiders stands for the Mexican Anthem and sits down to boos for our National Anthem. Great disrespect! Next time NFL should suspend him for the remainder of the season. Attendance and ratings way down,” Trump tweeted.

Walker also responded to Lynch’s protest, saying the running back is “taking this as a joke,” Fox reported.