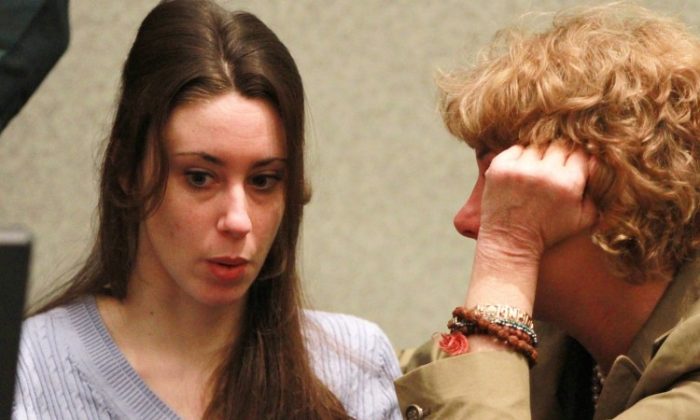 Casey Anthony (L) speaks with her attorney, Dorothy Clay Sims, at her sentencing hearing on lying to a law enforcement officer at Orange County Courthouse in Orlando, Fla., on July 7 2018. (Joe Burbank-Pool/Getty Images)
Crime and Incidents

A former roommate has accused Casey Anthony, the woman who made headlines after her daughter vanished before being later accused of the child’s murder, of “lying about everything” in the case. Anthony was later acquitted of murder charges in relation to the death of her 2-year-old daughter, Caylee.

“She’s lying about everything,” he said in an episode of Casey Anthony: Her Friends Speak on Reelz, reported the Daily Mail. “And that interview, where she says she sleeps pretty good at night, are you kidding me?”

House is referring to the 2017 comment Anthony made to The Associated Press. “I don’t give a [expletive] about what anyone thinks about me, I never will. I’m OK with myself, I sleep pretty good at night,” she said. House believes the response was unusual for a woman whose child had died.

When the girl was missing, he claimed Anthony partook in a “hot body contest” at the Fusion nightclub event that House had hosted. He believes the mother should have been worried about her daughter’s whereabouts.

House was surprised after learning about Caylee’s disappearance from police that her mother could seem so unaffected while doing her job.

“We were shocked and surprised that she could be out here doing what she had been doing that night and, meanwhile, her child is missing,” he said. “It came as a big shock once we found out about it but we just didn’t know.”

Before the girl went missing, House said Anthony gave the appearance of being a “very loving, attentive mother.”

Anthony also never had to “discipline Caylee because Caylee was such a well-behaved child,” House continued, adding the girl was quite bright for her age.

“She just didn’t seem like there was anything wrong,” he said. “She was like, ‘Hey, how’s it going? Good to see you.’ Then we went our separate ways. That’s the hardest part about this whole story, is that she was just completely so normal during the time Caylee was supposedly missing.”

House visited the site where the girl was found.

“That was just really hard, knowing that’s where she ended up. She didn’t deserve that at all, she really didn’t,” he said.

Mason told the legal news website Law & Crime: “I believe that Casey’s mind, in some dimension, I guess the common word would say ‘snapped.’ She didn’t go crazy by any means—but blackout, completely a blackout—of what went on and what happened.”

A jury acquitted Anthony of first-degree murder, aggravated manslaughter of a child, and aggravated child abuse in the case but she was convicted of lying to police.

Anthony was “close to, bonded to, and loved that child. The child who was perfectly healthy, perfectly clean dressed, well nourished, no instance of any prior injury, no abuse whatsoever. That’s the truth,” Mason told Law & Crime.