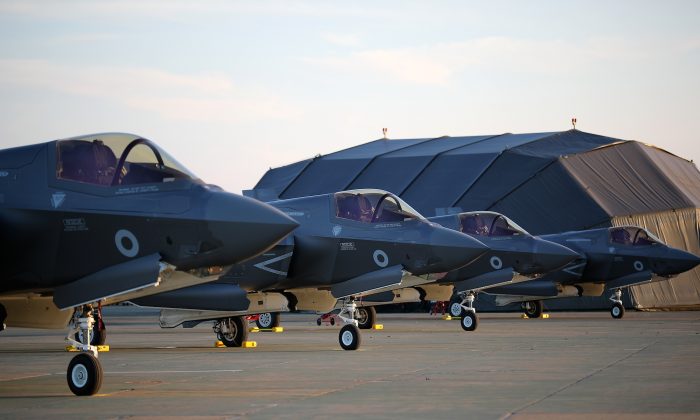 A former engineer for British multinational Rolls-Royce was arrested on June 12 after for allegedly passing military trade secrets to China.

Bryn Jones, a former chief combustion technologist employed by Rolls-Royce from 1968 to 1996, was arrested at his home in the United Kingdom, British newspaper The Sun first reported. He is suspected of giving away technological know-how related to a newly purchased Royal Air Force F-35 stealth fighter jet that cost 100 million pounds ($132.7 million).

The 73-year-old engineer was arrested after British intelligence agency MI5 received intelligence that classified information had been passed onto Beijing. He has since been released pending investigation.

Jones is currently a visiting professor of gas turbine combustion at Xi’an Aeronautical University in Xi’an City, Shaanxi Province, according to The Sun.

Rolls-Royce-developed technology is behind the F-35’s lift system that lets it hover and land ­vertically on aircraft carriers.

British police confirmed on June 14 that a man had been arrested in connection with an investigation under the Official Secrets Act, a British law against espionage. They seized computers and USB drives from Jones’ home.

Police are also looking into whether other information regarding Rolls-Royce’s def­ense contracts was put at risk, according to The Sun.

The British company is one of the world’s largest defense contractors and a top manufacturer of aircraft engines.

Developed by U.S. defense manufacturer Lockheed Martin, the F-35 fighter jet is among the most expensive weapons programs in history, at nearly $400 billion, according to the U.S. Defense Department.

Acording to Lockheed Martin, about 15 percent by value of each F-35 aircraft—which the company plans to expand to an over 3,000 global fleet—is manufactured in the United Kingdom.

The supersonic F-35 uses stealth technology to avoid being detected by radar and allows pilots to conduct attacks electronically.

The UK plans to buy 138 of the F-35 jets, according to British newspaper The Telegraph.

The Chinese regime has a history of stealing military technology. The Chinese air force’s J-20 fighter jet is widely believed to be a knockoff of the F-35. In 2014, Su Bin, a Chinese national, pleaded guilty to conspiring with Chinese military officers to steal design information and manufacturing technologies for the F-35 and other American fighter jets. Su assisted military hackers to access the computer networks of major U.S. defense contractors, such as aircraft manufacturer Boeing. In 2016, he was sentenced to 46 months in federal prison.