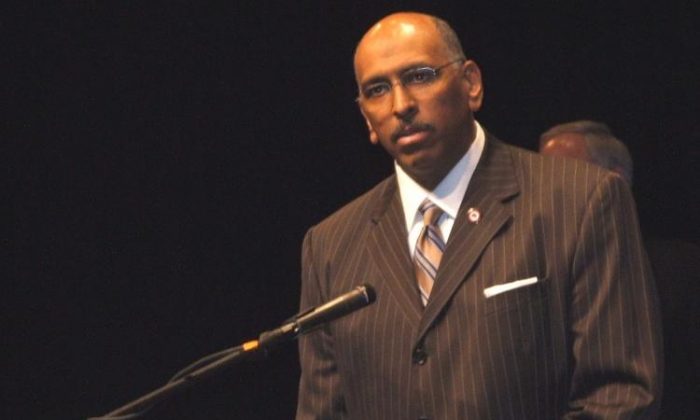 Michael Steele, a former leader of the Republican National Convention (RNC) and critic of President Donald Trump, has announced that he will not run for governor in Maryland, citing his family’s opposition to such a campaign.

Steele announced his decision in an interview with the Baltimore Sun.

“It’s not something the family wants me to do right now,” Steele said, adding, “My wife has never been a big fan of the political landscape. At the end of the day, you can’t be governor without the first lady.”

Steele, a “Never Trumper” who has fazed in and out of conservative political circles for the past two decades, would have faced a steep primary challenge from sitting GOP Gov. Larry Hogan, whose approval rating is one of the highest in the entire nation.

Steele served as a Republican Lt. Gov. for Maryland in 2002.

In 2006, Steel tried to maintain his presence in the Republican political scene with a bid for senator after Sen. Paul Sarbanes (D-Md.) stepped down from one of Maryland’s two seats. Steele, however, could not keep up with Democratic opponent Ben Cardin, who still serves as one of the state’s senators.

After this defeat, Steele would later make a bid to become RNC chairman in Jan. 2009. This bid was successful, and Steele’s win was partially attributed to the GOP’s desire to counter President Barack Obama with a charismatic black leader of their own.

Steele remained active in GOP circles through much of the rest of Obama’s presidency.

A few months after his 2009 victory to lead the RNC, Steele stirred controversy when he began to openly quarrel with legendary conservative pundit Rush Limbaugh over who led the GOP coalition.

In an interview on CBS’s Face the Nation, then-White House Chief of Staff Rahm Emmanuel opined that Limbaugh was the de facto leader of the GOP.

“[Limbaugh] is the voice and the intellectual force and energy behind the Republican Party,” Emmanuel argued, explaining “whenever a Republican criticizes [Limbaugh], they have to run back and apologize to him, and say they were misunderstood.”

Steele disagreed with this assessment.

Speaking on CNN’s D.L. Hughley Breaks the News in March 2009, Steele asserted that he was “the de facto leader of the Republican Party.”

Limbaugh later shot back at Steele on his own show, where he contended that Steele, who he called “obsessed with seeing to it President Obama succeeds,” was not fit to lead the Republican Party.

In the end, Steele backtracked on his remarks, apologizing to Limbaugh for having diminished his importance among conservatives.

In 2010, Steele organized and spoke across the country in what he styled the “Fire [Nancy] Pelosi” bus tour, a tour that helped the GOP to break fundraising records amid the larger Tea Party wave that saw figures like Sen. Rand Paul (R-Ky.) and other small government conservatives take Congress.

In 2011, Steele ran for reelection as RNC chairman. However, he could not hold onto the seat, and was forced to withdraw his name after the fourth ballot.

After this defeat, Steele’s relevance to GOP politics faded until 2016, when he made headlines for his opposition to then-presidential candidate Donald Trump.

In one 2016 interview, Steele argued that Trump had brought too much negative press to himself through his more controversial soundbites and brash manner.

“The only person who can hurt Donald Trump is Donald Trump,” Steele said, predicting incorrectly that Trump would be between 40 and 70 electoral votes short in the general election.

Steele remained overtly anti-Trump throughout Trump’s presidency, even after other Trump opponents, like 2016 GOP challenger Sen. Ted Cruz (R-Texas), had reached a rapprochement with their former rival.

Then in August 2020, Steele joined the Lincoln Project, a “Never Trump” political pact founded by RNC and Bush administration officials.

According to information compiled by Open Secrets, a website devoted to tracking money in politics, The Lincoln Project has received some of its most generous contributions from Democratic billionaires nationwide. After Trump left the White House, the organization has diverted most of its effort toward attacking mainstream Republicans candidates as “insurrectionists” in the wake of the Jan. 6 “Stop the Steal” rally.

“President Donald Trump and those who ascribe to Trumpism are a clear and present danger to the Constitution and our Republic,” the group contends on its website.

Like others involved with the Lincoln Project, Steele eventually endorsed then-candidate Joe Biden for president in 2020.