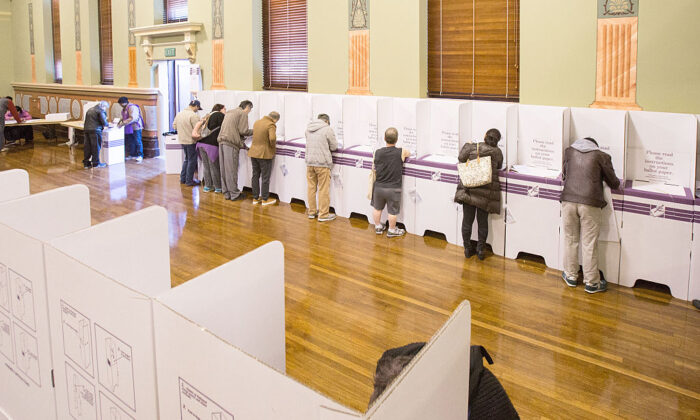 Members of the public vote in the 2016 federal election at Parramatta Town Hall in Parramatta, Australia on July 2, 2016 . (Photo by Cole Bennetts/Getty Images)
Australia

While it will only take a few minutes for Hassan Naji to get to a polling booth on Saturday, he says it will be the culmination of a decades-long journey.

“This is very important to me. In the 49 years of my life, it is the first time I will vote in a national election,” says Naji, an Afghan refugee who lives in Sydney’s western suburbs.

“I am very excited to vote to play a role in determining my future and the future of my children.”

The path from Afghanistan to a Sydney voting booth has been an arduous one. But he says he first tried to get to Australia by boat in 2001, but it was towed back to Indonesia by Australian authorities.

After a second attempt, he was sent to the offshore processing centre in Nauru. He then returned to Afghanistan, but fled again, before he was ultimately resettled in Australia in 2012 through the United Nations program.

He was unable to vote in Australia until he was granted citizenship in late 2019, just missing that year’s election.

As Naji heads to the ballot box, he says he’ll be thinking of the plight of other asylum seekers and refugees.

“I am not thinking of my interest only and my community interest but I’m thinking of the interest of the whole country, the economy and the future of Australia’s citizens, which I am now part of,” he says.

While the coalition and Labor now have very similar border policies, Labor has promised to grant permanent visas to more than 19,000 people Australia has already recognised as refugees but who must currently keep reapplying for their visas.

The policies are likely to be on the minds of many people voting in Sydney’s west and its surrounds, which are heavily populated and multicultural areas that are always significant to the outcome of elections.

There are at least five tight electoral contests in that area, where the winning margin at the last election was five per cent or lower.

Another first-time voter, 51-year-old refugee Nouriah Eliasi, says he will use his vote to support policies that help refugees already in Australia be granted a permanent home.

“They are integrated into the society. Some of them have children born (in Australia), who go to school here, learnt the language and work here,” Eliasi said.

“It’s cheaper to allow them to stay here than bringing somebody from overseas.”