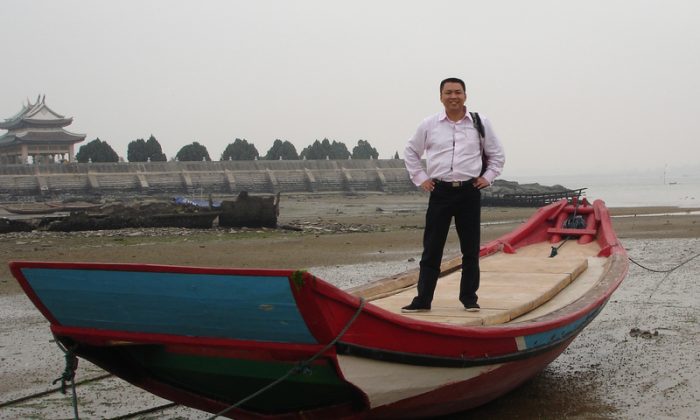 Abandoning his career and fortune, Chinese psychiatrist Ma Jinchun has followed his conscience to the United States, where he has discussed the communist regime’s abuse of political dissidents and religious prisoners.

Ma worked at a mental institution under the Shanghai Civil Affairs Bureau, where in August 2014 he met the elderly dissident Qiao Zhongling.

As with many others the Communist Party has categorized as political enemies, the police had labelled Qiao mentally ill and shipped him off to the No. 1 Shanghai Civil Affairs Mental Health Center.

The Chinese mental hospital, known euphemistically as “ankang” or literally “peace and health,” is a convenient institution that kills two birds with one stone—at once avoiding the need for legal incarceration and degrading the victim’s prestige.

As a young man, Qiao had suffered for supposed right-wing sympathies during the 1960s and was further persecuted for his support of democracy and criticism of the Communist Party in the following decades. Following the 1989 Tiananmen Massacre, Qiao rose to fame along with prominent dissidents such as Wei Jingsheng.

Qiao, who has spent the last five and a half years in mental hospitals, remains in the Shanghai institution, where he suffers from nerve damage caused by forcibly administered drugs.

In an interview with New Tang Dynasty Television, Ma Jinchun, who emigrated to the United States in June 2015, was already concerned about the human rights abuses perpetrated by Chinese authorities when he came into contact with Qiao in Shanghai.

“Mood-altering drugs have taken their toll on Qiao Zhongling, causing his hands and mouth to shake constantly,” Ma said. “He also suffers from high cholesterol, memory loss, and other symptoms. His situation is very bad.”

But when Ma tried to talk a co-worker into lowering Qiao’s dosage, the response was “anyone who dares oppose the Communist Party in this day and age is himself mentally ill.”

Ma continued his efforts to help Qiao, but was stonewalled at every turn. Administrative staff warned him not to get his nose into political affairs. Disillusioned, Ma made up his mind to leave China.

Born in Shanghai in 1970, Ma Jinchun became a psychiatrist in 2000, then received a law school diploma in 2004. From there he became a lawyer specializing in medical disputes.

But the next five years left him with little hope in the Chinese legal system, where corruption and loopholes almost invariably favored those with money and political connections.

“There’s no law in China,” Ma Jinchun told New Tang Dynasty. “It’s all about connections. Successful attorneys spend 80 percent of their time on relationships and 20 percent on their cases.”

Ma was particularly influenced by the example of Gao Zhisheng, a lawyer from an impoverished background whose ardent and successful defense of even the most disenfranchised clients distinguished him as one of China’s best.

But when Gao butted heads with the Communist Party by representing practitioners of Falun Gong, a traditional meditative faith that the regime has repressed since 1999, he was harassed, monitored, and eventually abducted and detained by the police. While detained over a period of around nine years, Gao faced tortures similar to that experienced by the Falun Gong adherents he once tried to protect. Gao is currently under house arrest.

Ma read books written by Gao, who is a Christian. Later Ma was moved to take up the faith as his own when he spoke to a dying lawyer, his colleague, who described his own guilty conscience from working in the corrupt legal system.

Exposing a World of Terror and Repression

Determined to save those like Qiao Zhongling and the jailed Falun Gong practitioners, Ma Jinchun began to gather information before taking refuge overseas. He collected an arsenal of evidence regarding Qiao’s case, including medical records, lab reports, long-term medical recommendations, appeals to the authorities and to other dissidents, and videos of Qiao describing his experiences that were covertly shot in the hospital by cellphone.

Other dissidents that Ma Jinchun spoke to include Shanghai resident Cai Guoming, who was institutionalized for 16 years because he had appealed to the authorities for a job change. Cai worked in the hospital canteen and was not in fact mentally ill, but was still forced to take psychiatric drugs.

Sixty-two-year-old Wei Xi is another patient at the Shanghai hospital. Imprisoned for 14 years, his offense consisted of filing a lawsuit against the authorities who forced him to relocate his residence. When asked by Ma about why he was committed to the mental institution, Wei said “It was because they did not want to give me my house.”

Such abuses are common when it comes to suppressing Falun Gong. According to “Political Psychiatry in China Today and Its Origins in the Mao Era,” a book-length study by Robin Munro published by Human Rights Watch and the Geneva Institute on Psychiatry, the incidence of the use of psychiatric hospitals in China to punish political dissidents and individuals with “incorrect” thoughts had fallen steadily throughout the 1990s to a level of one or just several percent of all cases. Munro reports that with the onset of the persecution of Falun Gong, the incidence of such abuse began moving upward.

According to investigations by the World Organization to Investigate the Persecution of Falun Gong, hundreds of Chinese psychiatric hospitals at the provincial, city, county, and district levels are involved in the abuse of jailed practitioners. Ongoing torture, brainwashing, and other violations are used as means to force Falun Gong practitioners to recant their faith.

Though Ma Jinchun has not personally witnessed the abuse of Falun Gong adherents, he said his experiences with Qiao Zhongling and other dissidents is enough to convince him of the allegations’ veracity.

Qiao has been detained or harassed by the Chinese regime since 1979, when he was arrested and sentenced to a three-year prison term in 1980 as a “counterrevolutionary”; his northern Chinese counterpart Wei Jingsheng received 15 years. Qiao was monitored after his release, prevented from normal work, and pressured to spy on other dissidents. The police even tried to arrange his marriage.

When Qiao thanked Ma Jinchun for his efforts, he responded:

“Teacher Qiao, if it weren’t for your opposing the communist dictatorship, you could have been a professor teaching at some university’s Chinese department, own a house and car, and be surrounded by children. You would not be here. You have sacrificed so much for the freedom of China. I am the one who ought to say ‘Thank you.'”

A moment later, Qiao said, “You are like a martyr from ancient times!”