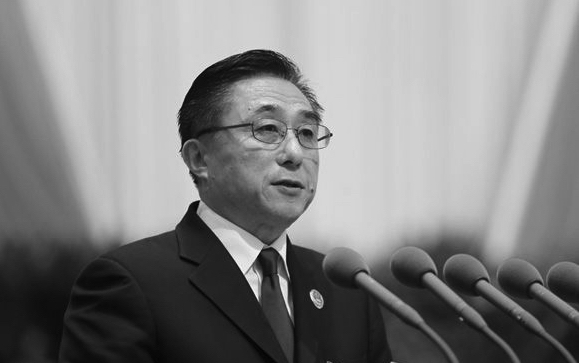 Chen Xu, Shanghai’s former top prosecutor, was expelled from the Chinese Communist Party on May 25 following a three-month investigation that found him guilty of corruption.

Chen, 64, was found to have accepted bribes, interfered with judicial processes, violated articles of Party discipline—including joining private clubs and holding “superstitious beliefs” (the Chinese regime is officially atheist)—and abused his position for the benefit of himself and others, according to a report by the Party’s anti-corruption agency.

The Central Commission for Discipline Inspection announced an investigation of Chen on March 1. His corruption case will be handed over to the Procuratorate, who will put him on trial, where it is almost certain he will be found guilty.

A native of Shanghai, Chen Xu served on the city’s judiciary since the 1970s, and eventually became the Prosecutor General of Shanghai People’s Procuratorate from 2008 to 2016. Chen was also once the deputy head of the Shanghai’s Political and Legal Affairs Commission, a powerful Party organ that oversees the prisons, the courts, and the armed police, in China.

Chen is the second high-ranking official from Shanghai to be purged since the launch of Xi Jinping’s anti-corruption campaign in 2012. The first was former deputy mayor Ai Baojun in 2015.

According to Chinese state media, Chen Xu started meddling with judicial cases as early as the 1990s. His corruption case has also led to a probe of over a hundred individuals in Shanghai’s judicial system.

Zheng Enchong, a human rights lawyer based in Shanghai, attributes the smooth progress of Chen’s career to his close ties with the infamous “Shanghai Gang,” a powerful political clique overseen by the family of former Party boss Jiang Zemin.

As head of the Shanghai No. 1 Intermediate People’s Court in 2002, Chen ensured Zhou Zhengyi, a corrupt Chinese businessman with close ties to the Jiang family, received light punishment disproportionate to the severity of his financial crimes, according to Zheng Enchong.

Zheng Enchong, the human rights lawyer, told The Epoch Times in an earlier interview that the probe of Chen Xu ahead of an important political conclave near the end of the year signals the downfall of Jiang’s “Shanghai Gang.”

Li Muen contributed to this report.