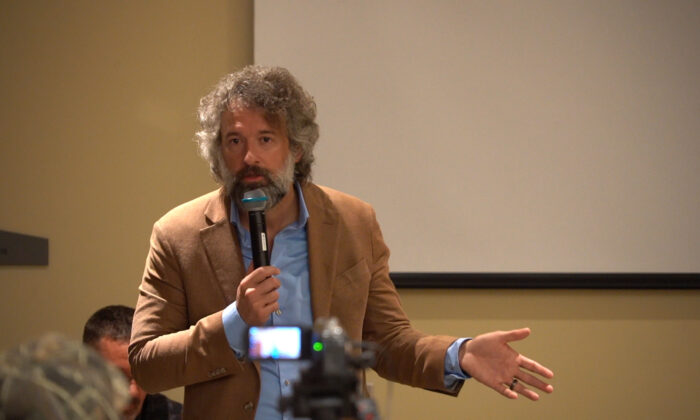 HAVERFORD, Pa.—Former law professor from New Mexico State University and prosecutor David Clements is touring across the United States to speak about election integrity and voting anomalies found in the 2020 presidential election.

Clements came to Haverford, Pa., on Sept. 16, and gave a 2-hour speech that presented evidence of irregularities that he collected from the 2020 presidential election.

“People don’t trust elections. They don’t trust the election system,” he told The Epoch Times before his presentation. “So what we’re trying to do is to highlight where the vulnerabilities are, and educate people on them on how to minimize those vulnerabilities. So people will have trust going forward.”

He has traveled to over 40 states in the last year.

“It’s a very controversial topic because again, the mainstream media has a narrative that this was the safest and most secure election in history. And we just know that’s not the case,” Clements said.

“American people have a high degree of intuition and common sense. The latest Rasmussen poll has 59 percent of all voters believe that there was widespread cheating in the 2020 election. So there’s a clear majority that aligns with what I’m saying,” Clements said referring to a Rasmussen poll released on Dec. 23, 2021.

“And then there’s a very vocal minority, usually occupied by the mainstream media, that are the cynics and critics,” he said.

“Everywhere I go, it’s to try to empower local citizens to look at their elections locally. Because we can’t fix all of it at once, the election system didn’t become this vulnerable overnight. So what we’re trying to do is to educate people on what the power is behind local officials that either certifies local elections or administer local elections.”

‘Truth is an Absolute Defense’

Clements’ presentation shows different deviations in the election, statistical anomalies, or behavioral anomalies, including legal deviations, where states did not follow their State Constitutions.

Deviations from rules that are on the books with election codes, included election workers rescanning the same ballots in the dark of night when Republican observers were sent home. There were also deviations from the cast vote record, where there is a large number of record tabulations on the machines themselves that are statistically improbable according to the law of large numbers theorem.

During his speech, Clements talked about the opposition and pressure that he has faced for what he is doing.

“It looks like I’ve got people stalking me, that are coming after me everywhere I go now because they’re so afraid to actually report the truth that they have to destroy the messenger,” he said.

“I get threatened with lawsuits quite often. The method of attack for me was to go after my law license. In the past one year and two months, I’ve had five complaints, and five investigations opened to disbar me for asking these questions and presenting evidence.”

He believes “truth is an absolute defense”.

Despite having faced such challenges, Clements said he will keep going until there is an election system in place that everyday Americans trust.

‘French Have a Good System’

About 50 people came to Clements’ presentation. Some audience members shared their thoughts on the election irregularities presented at the event.

Roy Timpe, an engineer, said he agreed with Clements. “We should ultimately go to a paper system. How we get from here to there is probably going to be difficult,” Timpe said.

Clements mentioned during his speech that “President Trump himself said the French have a good system.” France doesn’t use machines for elections. They do it manually and do it by paper.

Erik Kocher, a system safety engineer, also agreed. “We’re trying to get our Delaware County Council to reject the machines. Then we no longer have to deal with it, and to get back to hand ballots.”

He suggested that people need to become poll watchers or poll workers, need to go to the county council and keep track of these things in order to get the feel for what our elections are really like.

“The kind of research that we’re talking about with Dr. David Clements, is very serious information. The more we know about transparency, the better,” Clark said.  “We really have to have accuracy in our elections, and it’s not contaminated. And that is the big struggle we’re going through right now—having accurate, complete elections.”

Clark emphasized that Americans really need to have legal, constitutional elections.  “It’s very serious. We don’t want to lose what our forefathers shed their blood for people who gave up their lives,” he said.

The event’s organizer Joy Schwartz says events like this are important in order to inform and educate people about how the current voting system works.

“As citizens, we feel it’s our responsibility to learn as much as possible,” Schwartz said.

“And if we see issues, we need to have them fixed and we need to address our governments so that they will be responsive to the people and have fair elections.”

“He gave us a lot of very granular details about the machines, about how votes are reported,” she said. “[He] talked about different states and how they do things there. And so I think that we’ll be able to take a lot of what he spoke about and apply it to our situation here.”

In attendance at Friday’s event in Haverford, Leah Hoopes and Gregory Stenstrom, co-authors of the book “The Parallel Election”, told The Epoch Times that they faced intimidation, defamation, and harassment for presenting evidence of voter fraud in Pennsylvania.

“And obviously, we were not intimidated because we published the book, despite all of the issues that we’ve come across,” Hoopes said.

“So we wanted to give other people the courage to do what we did. And we wanted to get our evidence out, that’s been suppressed in all the courts.”

A big reason they wrote the book was to educate people, “So they understood the election process and how things worked. They weren’t accurately portrayed in many cases in the news. And this is a remedy to that,” Stenstrom added.