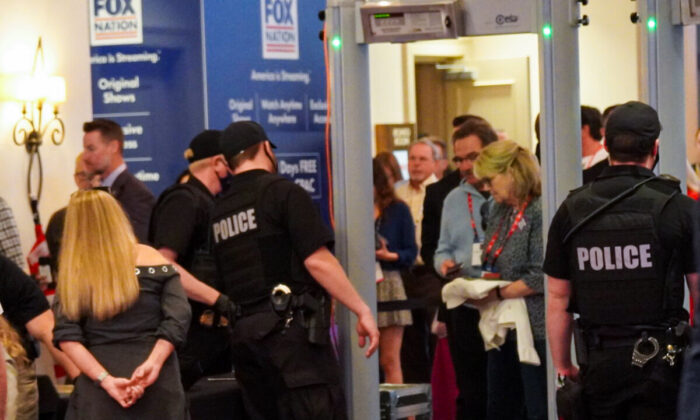 CPAC attendees make their way slowly through Secret Service security checks on the morning of Feb. 26 in anticipation of an evening appearance at the event by Former President Donald Trump. (Natasha Holt/The Epoch Times)
Republicans

Pro-Trump gear—bedazzled hats, MAGA shirts, and “Trump won!” buttons—made a swirling sea of red as thousands of attendees queued up for more than half a mile to enter on Day Three of the sold-out Conservative Political Action Conference (CPAC). It was the first day security was noticeable at the gathering, which always draws the political movement’s biggest household names and thousands of their fans.

Trump’s speech was scheduled for 7 p.m., and security sweeps throughout the day were expected. Organizers did not respond to requests for the number of people attending the event. Cost for tickets ranged from $50 for students to upwards of $7,000 for some VIP participants. The theme of the event celebrates being “Awake, not Woke.”

Outside under a sunny sky, attendees inched closer to coming in from temperatures rapidly approaching 80 degrees. Inside ballrooms at the Rosen Shingle Creek Resort, breakout sessions and panel discussions with politicians and pundits slowly began to fill.

Topics included “Lock Downs and Mandates: Now Do You Understand Why We Have a Second Amendment,” “More Brexits?” “Rethinking Conservatism,” “Ain’t Feelin the Bern,” and “Can CPAC Save Latin America?”

At 11:15 a.m., speakers were scheduled to move back on the conference’s main stage, starting with a session called “They Can’t Shut Us Up,” with Rep. Marjorie Taylor Greene (R-Ga.), a successful businesswoman who exudes fiery energy and has been repeatedly attacked by Democrats and some in her own party since taking office in 2021.

More main stage speakers’ topics before Trump included “Why the Working Class Hates the Democrats,” “Fire Fauci,” “Woke, Inc.,” and “Lock Her Up, FOR REAL.”

And scheduled to make speeches were Sens. Rick Scott (R-Fla.), a former governor of the Sunshine State; and folksy favorite John Kennedy (R-La.). Rep. Jim Jordan (R-Ohio), ranking member of the Committee on the Judiciary, was also slated to speak. Of late, Jordan has spoken publicly on his hopes that Trump will run again for president in 2024.

Day Two of the event concluded with dinner, dancing, and an auction called by Rep. Billy Long (R-Mo.), a professional auctioneer. At Long’s rapid-fire urgings, bidders shelled out cash for a variety of items, including $12,500 on a painting of Donald Trump clutching a flag, $20,000 each for two flags that would be flown one day soon over the U.S. Capitol in honor of the person of the winning bidders’ choices, and an Alaskan “fishing adventure” with the state’s governor, Donald Trump Jr., and his long-time girlfriend Kimberly Guilfoyle, who was previously married to California Gov. Gavin Newsom. The trip to catch salmon with the conservative trio brought in $75,000 to benefit CPAC.

Also on the agenda was a speech by conservative commentator, author, and broadcaster Glenn Beck. He urged audience members to stand up for freedom before it’s too late. He also pulled out two artifacts from his precious collection of historical artifacts. In a clear bag, he showed a blood-stained cuff that President Abraham Lincoln had been wearing when he was assassinated. He also showed the key that had been used by Lincoln’s killer to open the locked door of the box where Lincoln had been enjoying an evening at the theater when he was shot.

The gala wrapped up with a much-anticipated speech by Tulsi Gabbard, a 2020 Democrat presidential candidate and former congresswoman from Hawaii. Gabbard wryly revealed that people on both sides of the aisle had “strong thoughts” about her planned appearance at the conservative event. She thanked the crowd for making her feel “right at home.” The combat veteran’s patriotic speech urging unity to protect freedoms “given by God” and outlined in our country’s founding documents brought the crowd to its feet in a standing ovation. Meanwhile, Gabbard’s own party continued to vilify her on social media for her appearance.

CPAC concludes on Sunday with a speech by Donald Trump Jr. and a performance by Lee Greenwood, most famous for his iconic song, “God Bless the U.S.A.”