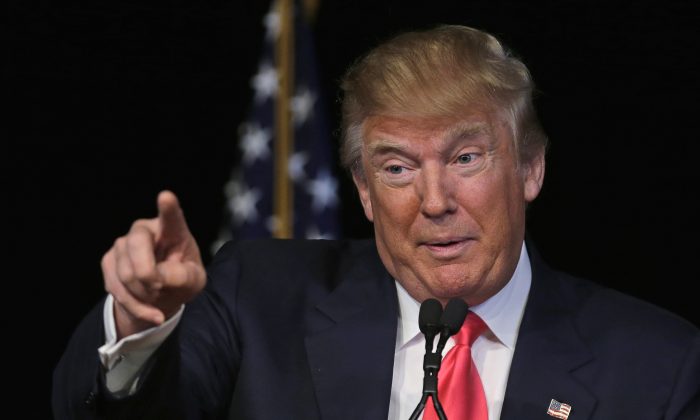 STRATHAM, N.H.—The Latest on the 2016 presidential campaign (all times local):

And now, an analysis of the 2016 presidential race from an expert.

Former President Jimmy Carter says Donald Trump is more “malleable” than Ted Cruz and as such might prove to be a more effective candidate over time. He adds that Hillary Clinton is likely to prevail over Bernie Sanders even though she faces a tough battle in New Hampshire.

Carter spoke Wednesday in Britain’s House of Lords, where he was supposed to talk about his impressive campaign against Guinea worm disease. But asked about the presidential race across the pond, Carter declined to predict the outcome of the primaries in either party, or to guess the winner in the general election. He made clear he would be backing the Democratic candidate.

The 91-year-old, who told the group his last medical report was favorable, received a standing ovation.

Chris Christie is laughing off suggestions that John Kasich is running a positive campaign and saying the Ohio governor’s sunny-side-of-the-street routine amounts to a “face lift.”

Christie is telling reporters that Kasich is someone who’s been known to speak his mind. He says he’s never heard other governors refer to Kasich as “the prince of sunshine and light,” mocking Kasich’s own comments recently that he is the prince of light.

Kasich, who can be a prickly personality, says he won’t run a negative campaign. But the super PAC backing his candidacy is launching a new ad showing people covered in mud, meant to represent Kasich’s rivals. The ad hits Jeb Bush and Marco Rubio for “going negative.”

It says, “doing whatever it takes to win is not presidential.”

That’s according to Cruz campaign manager Jeff Roe, who tweeted out the new fundraising numbers on Thursday.

Roe says the Cruz campaign has raised $10 million overall since the beginning of the year. That includes 182,000 individual contributions averaging $55 each.

Cruz was enjoying a big fundraising advantage over his Republican rivals even before the new numbers were released.

His campaign closed the year with almost $18.7 million in the bank. That was roughly as much as Marco Rubio, Jeb Bush, John Kasich and Chris Christie combined.

New Hampshire Sen. Kelly Ayotte is criticizing ABC News for its decision not to let Carly Fiorina on the debate state Saturday night.

Ayotte is facing a tough re-election battle against popular Democratic Gov. Maggie Hassan and has not endorsed a candidate in the GOP race for president.

Marco Rubio can’t avoid joking about the heeled boots he wore in New Hampshire this month, especially when he’s visiting a manufacturer known for its boots.

Rubio is talking to about 200 employees of Timberland corporate headquarters in New Hampshire, and acknowledging the boots were by another manufacturer, Florsheim.

He says: “Here’s the good news though. After I wore those shoes, the Florsheim website ran out of the shoe. It was kind of my own personal stimulus package.”

“So, if you’ve got any with high heels let me know so I can promote the sales.”

Bernie Sanders is receiving the endorsement of Dick Harpootlian, South Carolina’s former state Democratic party chair, in his bid for the White House.

Harpootlian told The Associated Press on Thursday that he feels the Vermont senator is best positioned to bring needed change to the country and connects well with issues important to young people, like wages and insurance.

Harpootlian, who supported then-Sen. Barack Obama over Hillary Clinton in the 2008 election, has known the Clintons for years but says he endorses based on his “gut” feeling, which he had for Obama.

Harpootlian says he was prepared to sit this cycle out after Vice President Joe Biden opted not to run and would have quietly made a donation to Clinton if she won the nomination. But the trial lawyer says Sanders is “cut from the same cloth” as Obama and former President Bill Clinton.

At a campaign event in Portsmouth, New Hampshire Thursday, Rubio is telling would-be Paul voters that he shares the Kentucky senator’s views on how to prosecute drug crimes and address problems in the criminal justice system.

Rubio hopes that his strong third place finish in Monday’s Iowa caucuses will provide the momentum needed to do well in the Feb. 9 New Hampshire primary.

New Jersey Gov. Chris Christie says his Republican presidential rival Marco Rubio isn’t qualified to be president and is vowing to continue his campaign regardless of the outcome of the New Hampshire primary.

Christie argues that the 44-year old Florida senator is too young to serve, and his experience as a Senator leaves him ill-equipped to beat Hillary Clinton, should she win the Democratic nomination.

Christie also dismisses preference polls ahead of New Hampshire’s Feb. 9 primary, saying the results from this week’s Iowa caucuses were not in line with some of the polls.