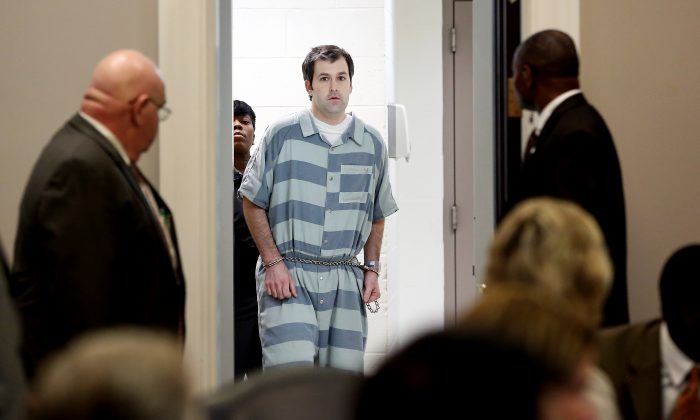 Former North Charleston officer Michael Slager (C) is lead into court for a bond hearing at the Charleston County Court House September 10, 2015 in Charleston, South Carolina. Slager is charged with the murder of Walter Scott. Slager shot Scott in the back when Scott ran away during a traffic stop on April 4th in 2015. (Photo by Grace Beahm-Pool/Getty Images)
US

A former North Charleston police officer who has been indicted in U.S. court on a civil rights violation by a federal grand jury pleaded not guilty on the afternoon of May 11.

The former policeman, who fired eight bullets—five of which hit unarmed man Walter Scott—was charged with deprivation of rights under color of law, use of a weapon during commission of a crime of violence, and obstruction of justice.

Slager chased and later shot Scott after a traffic stop in South Carolina on April 4, 2015, according to court documents.

“The indictment alleges that Slager intentionally misled [state] investigators by claiming that Scott was coming toward him with a taser at the time that Slager fired his weapon, when in truth, Scott was running away,” the Department of Justice said in a statement.

Slager was previously charged with murder in a state court before today’s hearing, but was released on bond earlier this year; If found guilty, Slager could face between 30 years and life in prison.

His state trial is scheduled for Oct. 31.

As far as today’s federal charges go, if Slager is convicted, he would have faced a maximum sentence of life in prison for the civil rights violation, as well as a potential $250,000 fine, according to the Justice Department.

According to ABC4 News, at the arraignment hearing that took place today at 1:30 p.m. in U.S. District Court in downtown Charleston, Federal prosecutors said that Attorney General Loretta Lynch would not be seeking the death penalty for Michael Slager.

Slager was released on $500,000 bail earlier this year and has been under house-arrest since January.