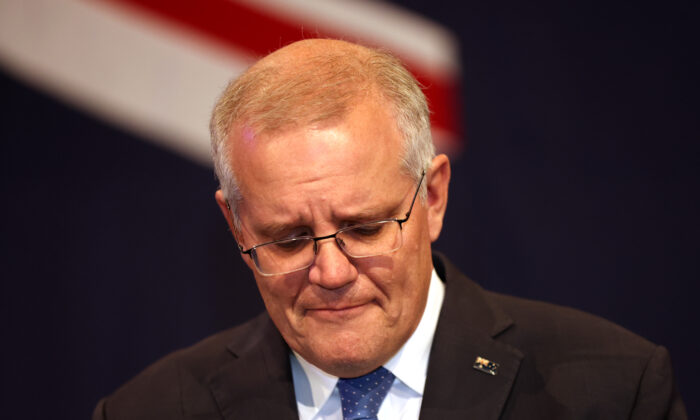 While former Australian Prime Minister Scott Morrison has been roundly criticised for secretly swearing himself into five ministerial portfolios, some political experts say the episode is a symptom of long-running problems in politics.

On Aug. 17, Morrison was forced to explain, in a press conference, his actions as well as his decision not to inform his fellow ministers in the health, finance, treasury, home affairs, and industry portfolios.

Morrison said he did not exercise any of the powers of his ministers at the time, except for the decision to kill off the PEP 11 Gas Project—supposedly in response to pressure from moderate MPs afraid of losing their seats.

However, the move has surprised and angered some former colleagues, with former Home Affairs Minister Karen Andrews saying she believed Morrison should resign from Parliament.

“This is just unacceptable, and if this is the way that he is prepared to conduct himself without an adequate explanation—even though it is now going to be well past the time when such an explanation should have been made—then it is time for him to leave the Parliament and look elsewhere for employment,” she told reporters. Morrison has since apologised to her.

“It’s one thing to have a Shadow Ministry. This was a Shadow Government, so that [Treasurer] Josh Frydenberg, [Finance Minister] Mathias Cormann, and [Home Affairs Minister] Karen Andrews and others, weren’t even told, nor were the secretaries of departments like Treasury and Home Affairs,” he told reporters in Brisbane on Aug. 17.

However, experts have pointed to several ongoing problems with the state of politics that contributed to the saga and that Morrison’s actions were more a symptom rather than a cause.

One is the lack of managerial and leadership experience in the upper echelons of government because of a decades-long proliferation of career politicians (who join political parties once they graduate from university) now filling the ranks of Australia’s major parties.

This, in turn, according to The Australian newspaper’s foreign editor Greg Sheridan, created a situation where Morrison felt he needed to take charge and centralise decision-making.

One example of this was the decision by Morrison and a few others to handpick candidates for several seats at the May 2022 election rather than enforce the pre-selection rules so that candidates could be chosen from grassroots members.

Warren Mundine, the former national president of the Labor Party, has also said there was a “big problem” in the major parties because they were failing to select candidates from outside of the system.

“People who have life skills and different work experiences within private, community, government, and academia—they are the people we should be looking at because of their experiences outside of politics, as well as their understanding of the general public and how things operate,” he told The Epoch Times. “At the moment, we’re just recruiting people from within, and it’s causing problems.”

Another ongoing political trend is the increasing centralisation of power—spurred by the pandemic—with ministers holding multiple critical portfolios.

For example, across the ditch in New Zealand, Prime Minister Jacinda Ardern holds a total of five portfolios, including the prime ministership, national security and intelligence, child poverty reduction, ministerial services, and arts and culture.

“What happened during the pandemic, the Australian premiers became more powerful than the prime minister,” Mundine said. “So that was a very weird, crazy world, and it affected a whole lot of people, and I think there’s a problem with politics in this day and age.”