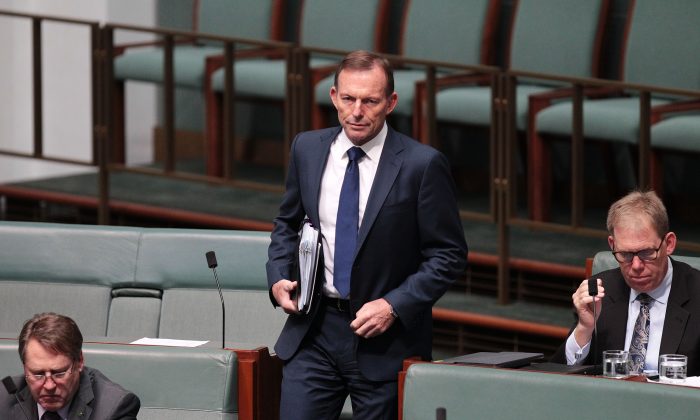 Former Prime Minister Tony Abbott has proposed that immigration to be cut in a bid to ease pressure on wages, infrastructure, and house prices.

In a speech addressed to The Sydney Institute on Tuesday, Feb. 20, Abbott said he wanted to see immigration numbers cut from 190,000 to 110,000 people a year, and is putting pressure on the government to bring the issue to the next election.

“My issue is not immigration; it’s the rate of immigration at a time of stagnant wages, clogged infrastructure, soaring house prices and, in Melbourne at least, ethnic gangs that are testing the resolve of police,” he said on Tuesday night.

He concedes that having “a bigger Australia” will make the country stronger in the long term but he said a short-term cut would boost the Australian economy and be in the “national interest.”

“I want a stronger Australia; and, over time, that should be a bigger Australia. But no Australian government should put the well-being of potential incoming migrants over that of the existing population,” Abbott said.

On the issue of housing, the former liberal party leader said that “especially in the past decade, higher immigration has boosted demand and factored into price” which has been coupled with lower interest rates at the banks.

“Almost half a million new dwellings have been required over the decade just to meet the increase in net overseas migration,” he said.

WATCH: @TonyAbbottMHR says Australia needs to cut the immigration rate if we want wages to rise and housing prices to drop. #theboltreport @SkyNewsAust

He also said “something has gone badly wrong” with the integration of some migrants where “58 percent of refugees who have settled here in the past ten years are living on welfare” and “only 30 percent” of the migrants that came to Australia have learned English.

“Without the national language, how can newcomers ever really find a job and fully integrate into our way of life?” Abbott said.

On the issue of employment, Abbott said that Australians might possibly be “too fussy about the jobs they’ll do” or whether they’ll work at all given the “availability of a don’t-ask-questions welfare.”

“But if it’s hard to find café or cleaning staff, maybe higher wages would help and maybe the welfare rules should be better policed. If it’s hard to find programmers, maybe companies need to do more training. And if no decent managers are available, maybe their pay might have to be increased – because that, after all, is how markets should normally work,” he said.

At the end of his speech, Abbott called for the Immigration and Border Protection and Home Affairs Minister Peter Dutton to lower the overall migrant intake numbers as the “government’s first duty is to its own citizens.”

“At least until infrastructure, housing stock, and integration has better caught up, we simply have to move the overall numbers substantially down,” Abbott said. “A strong migration programme in the long term doesn’t preclude a smaller one in the short term especially when there’s acute pressure on living standards and quality of life.”

Abbott’s speech followed on from earlier remarks by Liberal Senator Jim Molan as well as Dutton on Australia’s current rate of migrant intake.

“We now effectively control our borders in a way that few now trust the opposition to do. However, I am concerned that the level of legal migration – we now control our borders, obviously – is in excess of the capacity for our cities to absorb both culturally and in terms of infrastructure,” Molan said in his maiden speech to Parliament on Feb. 14.

In a 2GB interview, Dutton responded to Molan’s remarks by saying that the Coalition had already reduced migrant intake numbers by over 100,000 since Labor was in. “It’s come back considerably,” Dutton said, adding that the government was not tied to numbers.

But it was Dutton’s final remarks that were seen by Abbott as perhaps a signal that the front bench of the government was ready to openly discuss the issue. “If we have to bring it back further, if that’s what required and that’s what’s in our country’s best interests Ray, that is what we will do,” Dutton said, referring to overcrowding issues in some of the nation’s capital cities.

After Abbott’s speech, Dutton rejected the proposal that the government should reduce immigration levels, saying he believes the current immigration plan strikes the right balance, reported The New Daily.

“I want to bring people in as young as possible, as highly skilled as possible so they’re paying taxes for longer, they’re contributing to Australian society and they’re helping build our nation,” Dutton said at the National Press Club.

“That’s been the wonderful history of migration in our country.”

Former immigration minister Kevin Andrews has since backed Tony Abbott’s call for cuts to current numbers of migrant intakes, according to Sky News.

Dr Jane O’Sullivan, an honorary senior research fellow at the University of Queensland’s School of Agriculture and Food Sciences, told news.com.au in December that Australia was effectively “running to stand still” just to keep up with the demands on infrastructure to accommodate the growing population.

“It costs more than $100,000 in public money per person that we add to our population,” she said, according to the news website.