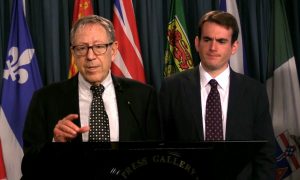 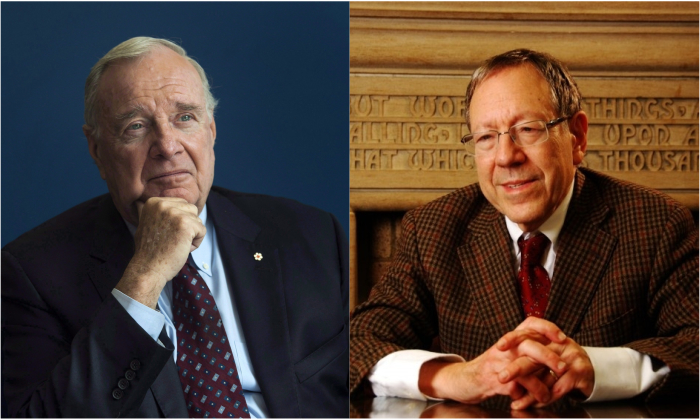 Cotler is ‘one of the most important public consciences that we have,’ says Martin
By Margaret Wollensak
biggersmaller
Print

Former Canadian prime minister Paul Martin nominated Irwin Cotler for a Nobel Peace Prize in part because he believes the human rights lawyer to be “one of the most important public consciences that we have.”

“Pretty well anywhere you go in Canada or in the world where human rights are issues, you hear about Irwin Cotler,” Martin said in an interview with The Epoch Times.

Cotler was justice minister and attorney general in Martin’s Liberal government but is perhaps better known for his legal work in defending human rights and prisoners of conscience.

“He was very active against racism and hate, and he also quashed more wrongful convictions in a single year than any prior minister of justice. And that’s what he did when he was in office. Outside of office, it was a long list of things, [including the] creation of the Raoul Wallenberg Centre for Human Rights,” said Martin.

“His career is absolutely outstanding. There’s no doubt in my mind that he deserves the Nobel Peace Prize.”

Arguably Cotler’s most notable achievement has been his work serving as legal counsel for prisoners of conscience—people who are arrested for exercising their freedom of expression, religion, thought, and belief. Cotler has represented prisoners like Nelson Mandela of South Africa and Andrei Sakharov of the former Soviet Union, and believes it is of the utmost importance to uphold people’s freedoms and rights.

Even while serving in Parliament, he took on human rights cases. His first political prisoner case was that of Ottawa professor and artist Kunlun Zhang in 2000. A practitioner of the Falun Gong spiritual discipline, Zhang was arrested while visiting China and imprisoned for his beliefs.

Thanks to Cotler’s efforts, Zhang was eventually released. He also worked to have Falun Gong practitioner Shenli Lin, husband of Canadian citizen Jinyu Li, released from prison in China in 2002.

“Those who are free can go on, and have gone on, to make an enormous contribution, not only to the society of which they are a part, but sometimes in utterly transforming that society,” Cotler said in an interview.

Natan Sharansky was a political prisoner in the former Soviet Union, and Cotler played a central role in his release. Saad Eddin Ibrahim, professor at the American University in Cairo, was jailed in Egypt under Hosni Mubarak’s regime. Cotler had to win an acquittal in the case three times, even studying the Egyptian constitution and criminal laws to write a brief to Egypt’s highest court of appeals.

“His arguments in my case, which included 23 other young associates, is still held up as a rare case of victory in the use of courts to reverse injustice towards the human rights community in Egypt,” Ibrahim said in his letter to the Nobel Committee.

“I can think of no greater ‘quiet hero’ to receive the Nobel Peace Prize.”

Importance of Speaking Out

The ability to freely speak out about wrongdoing is a cornerstone of democracy, and it is important to protect that right, Martin believes.

“Speaking out about civil rights is actually crucial if we’re going to have a democracy that is going to function,” he said.

Cotler said his passion and drive for human rights stems from his childhood. His father taught him that “the pursuit of justice was equal to all the other commandments combined” while it was his mother who taught him what it means to pursue justice.

Cotler describes the 1986 Nobel Peace Prize laureate Professor Elie Wiesel as the “conscience of our time,” and credits him with teaching significant lessons about the importance of speaking out against human rights abuses.

Cotler was a strong advocate for the Magnitsky Law that Canada adopted in 2017, following the lead of several other countries. Named after a Russian corruption lawyer who was beaten to death in a Russian prison, it allows the Canadian government to impose sanctions on foreign individuals accused of human rights abuses.

After he left government in 2015, Cotler founded the Raoul Wallenberg Centre for Human Rights, an international consortium of parliamentarians, scholars, jurists, human rights defenders, NGOs, and students in the pursuit of justice.

Driven to do the right thing

Some of Cotler’s many accomplishments during his 16 years in government include the first-ever law on human trafficking, quashing more wrongful convictions in a single year than any prior minister of justice, and making the pursuit of justice a government priority.

Martin described Cotler as driven to do the right thing, while at the same time being effective at explaining why he did what he did.

“It was not only his deep knowledge, not only the fact that he felt so strongly about it, but he also had the capacity to explain its importance,” he said. “I think you don’t see all those qualities in a one person very often.”

One of the cases Cotler is currently working on is that of Sun Qian, a Canadian citizen and Falun Gong adherent arrested in China in February 2017. She has been tortured and subjected to brainwashing sessions while in detention, according to her family.

“If you look around in terms of political prisoners today, regrettably it’s a global phenomenon,” he said, naming China and Iran as two of the worst human rights offenders.

Former Prime Minister Lester B. Pearson is the only Canadian to have won the Nobel Peace Prize. Cotler was previously nominated for the honour in 2008. He said he had no idea Martin planned to nominate him this time around.

“I was very surprised, and that’s putting it mildly,” he said. “I have the highest regard for Paul Martin. I’ve always said of him that he was the best prime minister that we never had the chance to fully experience because his term was cut short.

“A nomination coming from him was very moving and very, very humbling.”