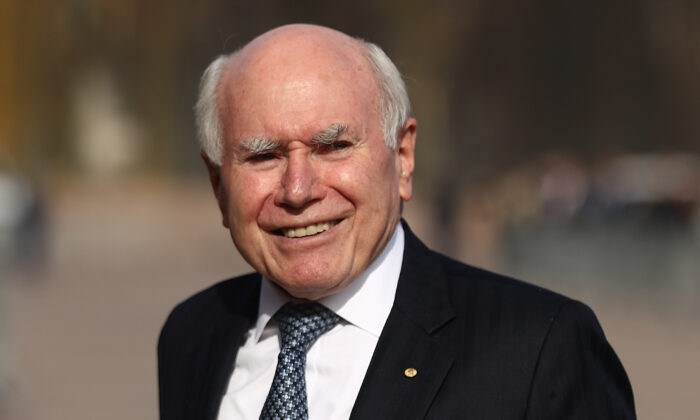 “It’s come out of the slow lane, it’s humming,” Howard told reporters in the seat of Newland, Adelaide, which is expected to be tightly contested on Saturday.

The former prime minister, who was in office from 1996 to 2007 and was best known for his economic achievements, said South Australians will vote for Marshall because he’s put the state “back on the national map economically.”

“The truth is that Steven Marshall has turned around South Australia’s economy,” Howard said, noting it had been in the economic slow lane under previous leaders.

He cited lower unemployment rates, a Gross State Product (GSP) growth figure of 3.9 percent, and a credit rating that is now beating other states.

“You can’t dispute those figures,” he said.

Howard said Marshall doesn’t need much advice in the last few days of his campaign, noting that the state had been lagging behind the rest of Australia, and in four years he’s changed that.

“If you look at an analysis based on reality, it is amazing the job this man has done in just four years,” Howard said.

“I don’t want to see South Australia slip back into the slow economic lane, and there’s a real danger that will happen if it returns a Labor government,” he said.

Despite poor results in recent polls, Howard said the only one that counts was at the election booth on Saturday.

“Before the British people, wisely in my view, voted to leave the European Union, the polls said they would stay,” he said.

“I think this passion to analyse the polls as if they are the last word, I mean I’ve seen a lot of polls and I’ve been buffeted by them in the past, and I’ve been exalted by them.

“What I know is they can often be a very poor guide, and even more so when they are state-wide,” he said.

Marshall’s strategy for a strong economy in South Australia has been to focus on new investments and jobs, with initiatives such as establishing a world-class hydrogen hub, empowering women through skills, more apprenticeships and traineeships, investing in the state’s national parks and open spaces to boost tourism and liveability, constructing Australia’s first space manufacturing hub in Adelaide, and opening up new opportunities in the plant protein industry.

In addition, in order to keep the cost of living under control, Marshall has promised to make real-time fuel pricing permanent, lower public school fees, power bills and water bills, as well as implement a local government rate capping scheme.

Ramping refers to when paramedics are required to continue to care for patients instead of handing over clinical responsibility to the emergency department (ED), most often because no beds are available in the ED.

In November 2021, the ABC reported that the state’s health system had been dealing with an ongoing ramping crisis which saw some patients spending up to five hours in the back of an ambulance.

In addition, ED beds are often taken by mental health patients who have nowhere else to go, leading to ramping, so Malinauskas said he would provide 120 new dedicated mental health beds, in addition to 20 new drug rehabilitation beds, and a comprehensive package for pharmacies to help ease pressure on emergency departments.

Polling booths will be open from 8 a.m. to 6 p.m. across the state on Saturday.