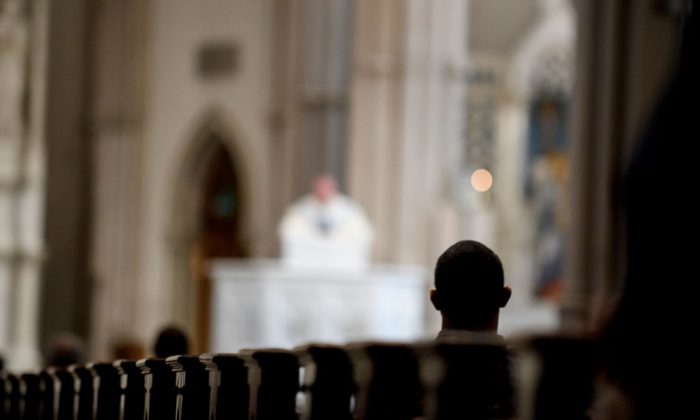 Parishioners worship during a mass at St Paul Cathedral in Pittsburgh, Pennsylvania on Aug. 15, 2018. (Jeff Swensen/Getty Images)
Crime and Incidents

A former Catholic priest has been sentenced to five years of probation with two years of home confinement and location monitoring, for lying to investigators about not knowing a former parishioner and victim of sexual abuse.

Robert Brennan, 84, of Perryville, Maryland, was a priest in the Archdiocese of Philadelphia from 1993 to 2004. He served at Resurrection of Our Lord parish in the Rhawnhurst section of Northeast Philadelphia. He was sentenced this week by U.S. District Judge Anita B. Brody, according to a statement from U.S. Attorney Jennifer Arbittier Williams.

Brennan pleaded guilty to making materially false statements in a matter within the jurisdiction of the executive branch of the United States government, in connection with an April 2019 FBI interview, during which Brennan made a number of false statements.

The McIlmail family filed a civil lawsuit in November 2013, against the Archdiocese of Philadelphia and Brennan. That lawsuit was settled for an undisclosed amount in May 2018. But during an April 2019 interview with the FBI, Brennan made several false statements, including that prior to the filing of the 2013 criminal case and civil lawsuit against him, he did not know Sean McIlmail, his father, mother, or brother.

The FBI’s Philadelphia Field Office began investigating the Roman Catholic Church regarding reportedly widespread child sexual abuse by clergy after the Pennsylvania Attorney General conducted grand jury investigations in 2005, 2011, and 2018, and uncovered allegations of sexual abuse against dozens of current and former priests, including Robert Brennan.

Brennan was named in the 2011 grand jury report, which alleged he had engaged in “inappropriate or suspicious” behavior with more than 20 boys from four different parishes.

“The defendant had a long career as a Catholic priest, marred by continuous and sustained allegations that he was ‘excessively involved’ with young boys, and later outright accusations of molestation,” Arbittier Williams said in a March 24, 2022 sentencing memo. “The claims against the defendant led to him being admitted to the archdiocese’s treatment program for priests with inclinations toward children at St. John Vianney Center in Downingtown, Pennsylvania, first in 1988, and again in 1992.”

Arbittier Williams said the Archdiocese moved Brennan from parish to parish to be placed among unsuspecting parishioners and their children, with full awareness of the danger he posed.

Sean McIlmail came forward in 2013, telling the Philadelphia Police Department that Brennan sexually abused him between 1998 and 2001 when he was in middle school at Resurrection of Our Lord School. By the time he made the report, he was 26 years old. Based on McIlmail’s report, in September 2013, police arrested Brennan and charged him with sexual assault and related offenses, which were ultimately dismissed after McIlmail’s death.

After the Archdiocese of Philadelphia settled the civil case with the family, the FBI started an investigation to determine whether any federal offenses had been committed.

Although Brennan said four times that he didn’t know the family, the FBI found the McIlmails were prominent in the church and school, and numerous people saw Brennan with Sean and other family members.

Four counts of making a material false statement carry a total maximum term of 32 years in prison, a 3-year period of supervised release, and a $1 million fine, Arbittier Williams said in her sentencing memo. But the parties came to a plea agreement in the sentencing, in part because Brennan accepted responsibility for lying to the FBI.

“Any attempts by the government to broaden this false statements case into something more serious should be dismissed outright,” says his March 24, 2022 defense sentencing memo, written by federal public defenders Katrina Young and Catherine Henry. “Mr. Brennan has lived a full and interesting life. His pursuit of higher education is particularly laudable and a source of great pride. Prior to his arrest, his most enjoyed activities were taking long walks at Longwood Gardens in Chester County, Penn. and going to the library. He has made peace with his separation from the priesthood but remains devout in his faith. He is relieved to have the instant case finally come to an end and wants nothing more than to continue on with his modest, private life for however long time permits.”