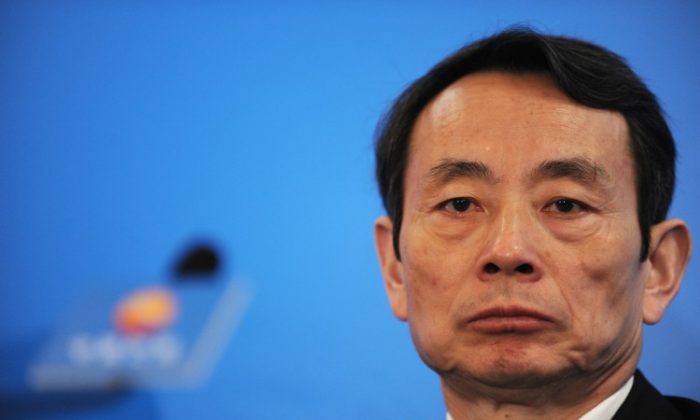 Former chairman of PetroChina Jiang Jiemin made headlines recently, after the story of a disgruntled employee was plastered across mainland media, accusing the oil company’s executives of corruption.

A former employee using the alias Yang Xu, who worked at PetroChina Lanzhou for the past 24 years, told Southern Weekly that he had written more than 1,000 letters over the past two years to then-chairman Jiang Jiemin, complaining about unfairness towards regular workers and management’s secret perks.

Yang said benefits doled out to junior managers included compensation for housing and other expenses far exceeding the top limits set by authorities. He claimed Jiang had confiscated all his letters, and some managers had tried to silence him.

PetroChina is a state-owned oil and gas monopoly under the auspices of the National People’s Congress. It has long been under the direct control of former head of the Political and Legislative Affairs Committee (PLAC) and former Politburo Standing Committee member, Zhou Yongkang and his son.

Jiang Jiemin was appointed chairman in 2006, and became a key figure. Sources from Sichuan and PetroChina told The Epoch Times that after Jiang became Zhou’s political sidekick, he embezzled huge sums of company money and gave Zhou enormous financial support.

The massive corruption at China National Petroleum Corporation (CNPC) and China Petroleum Chemical Corporation (CPCC or Sinopec) has been a public focus for some time. When the communist regime’s “Two Meetings” ended last October, and Zhou Yongkang retired from the Standing Committee, Jiang Jiemin “proactively” resigned as CNPC president and was put under investigation by the Central Commission for Discipline Inspection.

According to Caixin, a relatively liberal mainland business magazine, Jiang was appointed chairman of the government body responsible for managing state-owned enterprises. On the surface, it appeared to be a promotion, but was in fact a downgrading.

An insider told The Epoch Times that the oil baron has been implicated in a murder, and has also been involved in money laundering. Investigations show signs of money laundering businesses throughout all levels of the management chain in PetroChina’s large-scale projects and high-value investments. As the case is very complex and extremely large sums have been laundered, the Party leadership has stepped in, and an investigation is underway by the Central Commission for Discipline Inspection, the insider said.

CPCC’s Chairman Fu Chengyu and General Manager Wang Tianpu are also being investigated by the Central Commission for Discipline Inspection.

“All this means that another ‘big tiger’ is emerging in Xi Jinping’s and Wang Qishan’s war against corruption,” Epoch Times commentator Zhou Xiaohui wrote on March 27, referring to the new Party leader and his anti-corruption chief.

As Southern Weekly, a Guangzhou-based, liberal newspaper, was the first media to expose Jiang’s blocking of the whistle-blowing PetroChina employee, this signals imminent disciplinary action against Jiang.

According to commentators, the news report was aimed at encouraging more complaints and perhaps the exposure of more irregularities within Sinopec and PetroChina.

In early 2013, Southern Weekly published a New Year’s greeting in support of Xi’s “dream of constitutionalism,” which was altered by Tuo Zhen, propaganda chief of Guangdong Province and trusted cadre of Li Changchun, ex-propaganda czar and a close ally of former Party head Jiang Zemin. The incident sparked strong opposition from newspaper employees, as well as condemnation from intellectuals across the country.

According to analysts, members of Jiang Zemin’s and Zhou Yongkang’s faction fear that Xi will use the idea of upholding the constitution, and fighting corruption, to further downgrade their power.

Translation by Frank Fang and Sophia Fang. Written in English by Gisela Sommer.