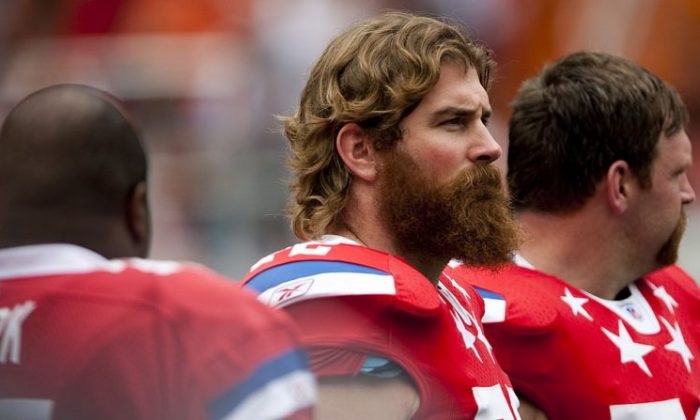 Matt Light No. 72 of the New England Patriots stands on the field during the 2011 NFL Pro Bowl at Aloha Stadium on Jan. 30, 2011 in Honolulu, Hawaii. (Kent Nishimura/Getty Images)
NFL

Matt Light never thought he would be ashamed of the team he won three Super Bowls with, but the 16 players who knelt during the national anthem on Sunday, Sept. 24,  have him fuming.

“If you think that it’s OK to take a knee during our national anthem and disrespect openly the national anthem, you are wrong,” Light told the Boston Herald. “I don’t care if you have a ‘But what about’ or a ‘It’s because of,’ that doesn’t’ matter.”

Light was the longtime left tackle and blindside defender for Tom Brady. Knowing what a tight ship the Patriots run, he was shocked that a protest was allowed to take place during the anthem.

“Nobody can force anybody to do anything in a situation like that. If he chooses to do it he’s going to do it,” Light said. “But I’m going to tell you this much, with the amount of preparation and attention to detail and all the things that happen in that organization, I’m really surprised that it wasn’t dealt with so it didn’t get to that point.”

The protest on Sunday was the first time any player on the New England Patriots team took a knee during the national anthem. Tom Brady, the face of the league, remained standing with a hand over his heart.

But such a protest “would have never happened during my time,” Light said. “As a guy that’s been there and helped set up the Patriot Way so they can walk in there and do what they do, it’s beyond disheartening. It’s the first time I’ve ever been ashamed to be a Patriot. And I promise you I’m not the only one.”

The wave of national anthem protests gained steam on Sunday after President Donald Trump demanded respect for the American flag and said that teams should fire players who disrespect the country by kneeling during the national anthem.

“We’ve never been those people. On the door going out it says ‘Ignore the noise.’ It says ‘Ignore the hype.’ It says ‘Manage expectations.’ And it also says ‘Speak for yourself.’ If that is not the Patriot Way anymore, then I am very disheartened and very upset,” Light said. “I’m also not saying that I’ll never be a Patriots fan. What I’m saying is I’m very ashamed.”

Light wasn’t the only one who found the protest in poor taste. ESPN and The Associated Press reported that the fans booed loudly when part of the team took a knee.

Light, who grew up in Ohio, sat next to the wife of a slain military member attending her first NFL game.

“His wife had to sit at her first NFL game and watch what these men chose to do. Her husband died, gave his life up so that they could do that,” Light said.

“That’s the reality that these so-called men don’t understand. Is it about their cause or is it about them? If it was about their cause, I could come up with a million different ways for them to really truly change things. If it’s about them, well … you see what happens. The collateral damage is widespread,” he added. “They obviously didn’t think about anybody other than themselves.”