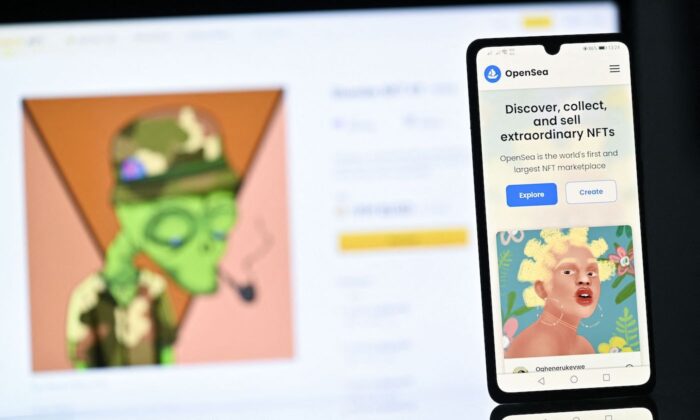 A former executive at the largest online marketplace for buying and selling non-fungible tokens (NFTs) has been charged with insider trading in a first-of-its-kind case for the Justice Department (DOJ).

Nate Chastain, a former product manager at New York-based OpenSea, was apprehended in New York on Wednesday before appearing in the U.S. court for the Southern District of New York, the DOJ said in a press release.

The 31-year-old faces one count of wire fraud and one count of money laundering, in connection with a scheme to commit insider trading in NFTs, “using confidential information about what NFTs were going to be featured on OpenSea’s homepage for his personal financial gain,” the DOJ said.

If found guilty, he faces up to 40 years in prison.

An NFT is a type of digital asset that represents real-world objects such as artwork, music, and memes. They are non-fungible, meaning they are one-of-a-kind and are bought and sold online using the cryptocurrency of the Ethereum blockchain.

NFTs have gained traction this year, prompting celebrities to cash in on the hype, including award-winning director Quentin Tarantino who auctioned off several uncut scenes from “Pulp Fiction” as secret NFTs in November. They were auctioned on OpenSea.

Prosecutors said Chastain’s responsibilities while employed at OpenSea included selecting exactly which NFTs would be featured on its homepage; something that was usually kept secret and confidential until they appeared on the page.

Officials further alleged that once an NFT was featured on OpenSea’s homepage, it would sell for more money.

Other NFTs made by the same NFT creator whose digital asset had featured on the home page would also typically see an increase in the price buyers were willing to pay for them, officials said.

Between around June 2021 to at least September 2021, Chastain “violated the trust and confidence of his employer” when he exploited his advanced knowledge of what NFTs would be featured on OpenSea’s homepage and secretly purchased dozens of NFTs shortly before they were featured.

After those NFTs had been featured on the homepage for OpenSea, Chastain would then sell them on, making profits of up to five times the price he initially paid for them.

To conceal the fraud, the former exec would make the purchases and sales using anonymous digital currency wallets and anonymous accounts on OpenSea, prosecutors allege.

Charging documents allege that Chastain purchased approximately 45 NFTs in 2021 on 11 separate occasions and sold them for two to five times what he had just paid for them.

U.S. Attorney Damian Williams said: “NFTs might be new, but this type of criminal scheme is not. As alleged, Nathaniel Chastain betrayed OpenSea by using its confidential business information to make money for himself. Today’s charges demonstrate the commitment of this Office to stamping out insider trading—whether it occurs on the stock market or the blockchain.”

Chastain resigned from his role at OpenSea in September 2021. At the time, the marketplace said in a blog post that it has a “strong obligation to this community to move it forward responsibly and diligently” and that “the behavior of one of our employees violated that obligation and, yesterday, we requested and accepted his resignation.”

The post did not name the individual but added that OpenSea does not “take this behavior lightly” and had commissioned a third party to conduct a review of the incident and make recommendations about how it could bolster existing controls.

OpenSea has since implemented two new employee policies, which prevent workers from buying or selling from collections or creators while they are being featured or promoted by the company, and ban staff from “using confidential information to purchase or sell any NFTs, whether available on the OpenSea platform or not.”

“As the world’s leading web3 marketplace for NFTs, trust and integrity are core to everything we do. When we learned of Nate’s behavior, we initiated an investigation and ultimately asked him to leave the company. His behavior was in violation of our employee policies and in direct conflict with our core values and principles.” an OpenSea spokesperson told The Epoch Times.