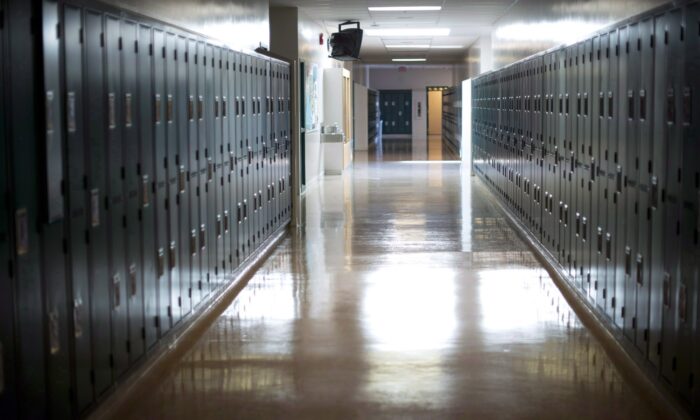 An empty hallway is seen at a secondary school in a file photo. (The Canadian Press/Jonathan Hayward)
Canada

A former Ontario teacher who gained some recognition on social media during the COVID-19 pandemic is facing disciplinary investigations due to alleged professional misconduct with female students.

The allegations against Ryan Imgrund are detailed in a notice of hearing from the Discipline Committee of the Ontario College of Teachers. Imgrund was employed by the York Catholic District School Board as a department head in Newmarket, Ontario, until he resigned from the college on June 8.

The college alleges that Imgrund was guilty of “sexually,” “psychologically,” or “emotionally” abusing five female students in a series of interactions dating back to 2015. The students were all members of a girls’ team Imgrund coached.

None of the charges against him have been proven in court.

The notice of hearing said that on Nov. 24, 2017, during a out-of-town trip for an Ontario Federation of Schools Athletic Associations tournament, Imgrund “interacted in an inappropriate manner” with members of the team, including messaging them late at night to invite them to meet him at the resort pool.

“Going down to the pool,” one of the messages allegedly said. “‘Get your floaties and meet me in the pool,’ or words to that effect.”

Imgrund was in the room below the students, and when the students didn’t respond to his messages, he “banged on his ceiling/their floor” and called them “late in the evening and/or early in the morning hours” asking why they didn’t reply, the college alleged.

Between September 2017 and February 2021, Imgrund “engaged in an inappropriate personal relationship” with one of the students, the notice of hearing said.

The college alleged that Imgrund sent “numerous text, email and/or social media messages of a personal nature” to the student, asking to exchange photographs with her. He allegedly sent her shirtless pictures of himself, saying things such as “if you don’t say I’m good looking I’ll cry.”

The college also alleged that he “requested, and/or received, photographs” from the student, including a photo of her in a T-shirt and shorts and one of her in a bathing suit.

The college alleged that on one or more occasions when the student stopped replying to his messages, Imgrund “yelled at, and/or scolded her, and/or told her that he needed to be respected.”

Between around September 2016 and February 2021, Imgrund on one or more occasions used a technique “requiring the students to push their buttocks up against him” during one-on-one practising with at least one and up to three of the students, the college alleged.

Imgrund, who self-proclaims as a biostatistician on social media, has been invited to speak on television about COVID-19 policies, including an interview in October 2021 when he spoke on the subject of a potential cancellation of March Break for students.

On April 27, 2022, the college’s Adjudicative Body of Chairs directed the registrar to suspend Imgrund’s certificate of qualification and registration until the allegations against him have been disposed of by the Investigation Committee, Discipline Committee, or Fitness to Practise Committee, according to the college’s website.

Imgrund’s case was referred to the college’s discipline committee on June 21, with the hearing date still to be determined.

The Epoch Times reached out to Imgrund for comment but didn’t hear back by publication time.